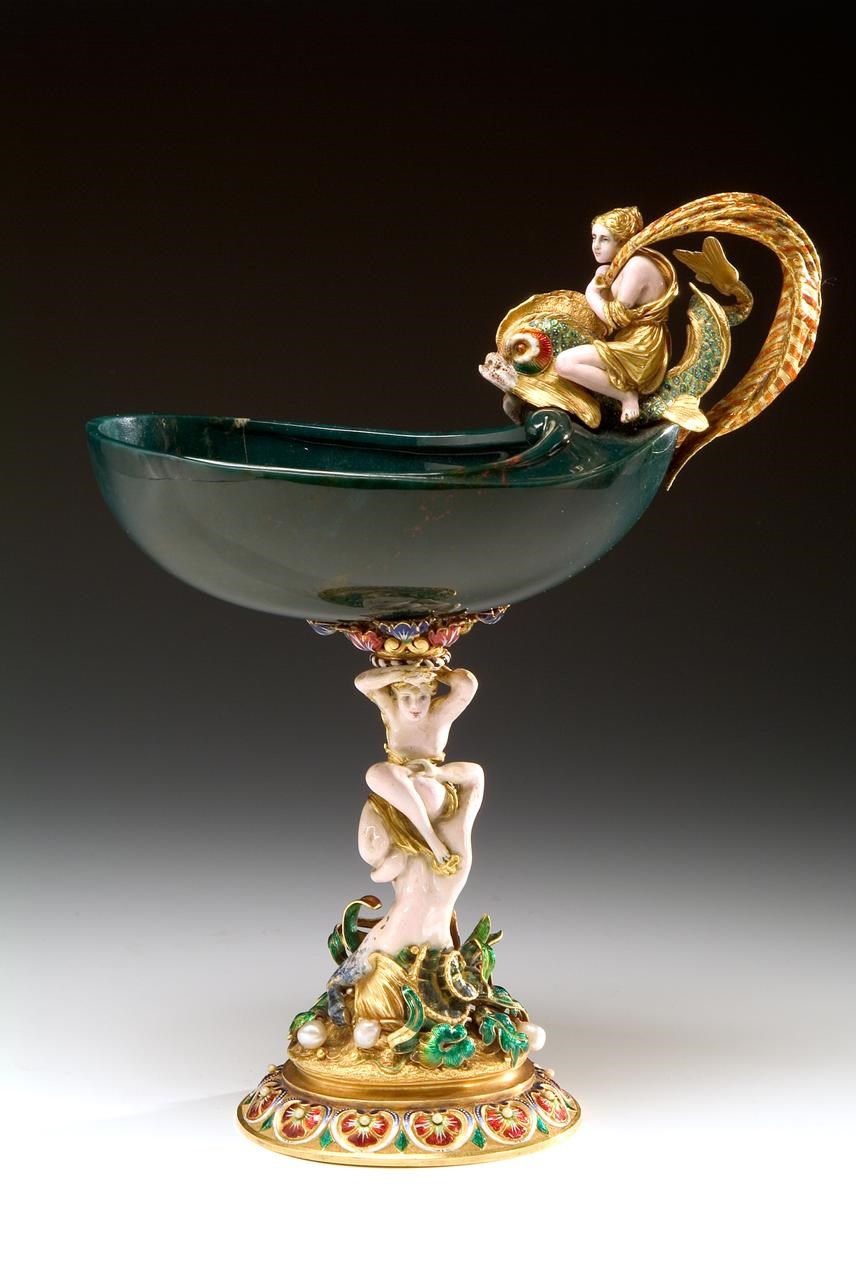 We are overly proud to unveil one of our latest acquisitions: an extraordinary Baroque revival bloodstone cup made by Jean Valentine Morel around 1855.

Throughout history, the culture and heritage of the past have influenced later eras in their artistic production. The results of this influence can be detected when a generation rejects the immediate past to find comfort and inspiration in distant times. At the beginning of the 19th-century, scholars such as Winkelmann noted that only the beauty of Greek art was worth studying, and it 'was not simply nature; but more. Something superior, ideal beauty, brain-born images.’ However, an aversion to Neoclassicism and a new curiosity about times other than the classical ones spread among collectors as artists like Jean Valentine Morel started disseminating Renaissance and Baroque revival pieces around Europe.

Jean Valentine Morel, who trained in Paris under Jean Maximilien Vachette, who produced gold boxes for Louis XVI and Napoleon, stated that he wished to return the art 'to the importance it had in the hands of the old masters'. He indeed attempted to bring these antique objects back into fashion for the collectors' taste.

During the 19th century, the collecting craze spread to a new generation of collectors who had made their fortunes after the industrial revolution thanks to their commercial activities. Therefore, the art market flourished, and a new class of dealers, such as Frederick Spitzer, benefited greatly from the great demand for art objects. However, due to this renewed passion for antiquity, the demand for artworks became unsustainable for the supply of proper objects. For this reason, many dealers such as Spitzer, driven by this commercial opportunity, began to supply their customers with revival items sold as Renaissance or Baroque originals.

For obvious reasons, the identity of the artists in charge of the production of revival objects had to remain anonymous. Only in more recent times have some of these names entered the public domain, such as that of the famous Reinhold Vasters. Reinhold Vasters was a German goldsmith who, driven by the need to make money to support his family after the death of his wife, began producing a large quantity of jewellery and drinking vessels of revival design. However, Vasters' fakes did not come to light until years after his death, when the Victoria and Albert Museum in London began an investigation.

Although many of these objects included original elements, minor features were often hybrids with new elements described as 'fantasy' by Ferdinand Bardienne in a catalogue published in 1886, which would have never been included in the Renaissance designs.

It is unclear whether Morel's pieces were ever sold as Baroque originals by some London dealers. What is certain is that this tazza, being engraved MOREL & SÉVRES on the foot-rim, was never intended to deceive the collector's eye and was always meant to be a Morel original object.

The original design for this beautiful cup can be observed in the catalogue for the London 1851 Great exhibition at the Crystal Palace, where Morel exhibited a tazza made of carved agate with the same design and gold and enamelled mounts. The inspiration is, however, Baroque. Hardstone cups with gold and enamelled mounts like this (once the property of the Medici family and now in the Museo degli Argenti in Florence) were produced in Italy during the Renaissance and in France by Pierre Delabarre around 1630. 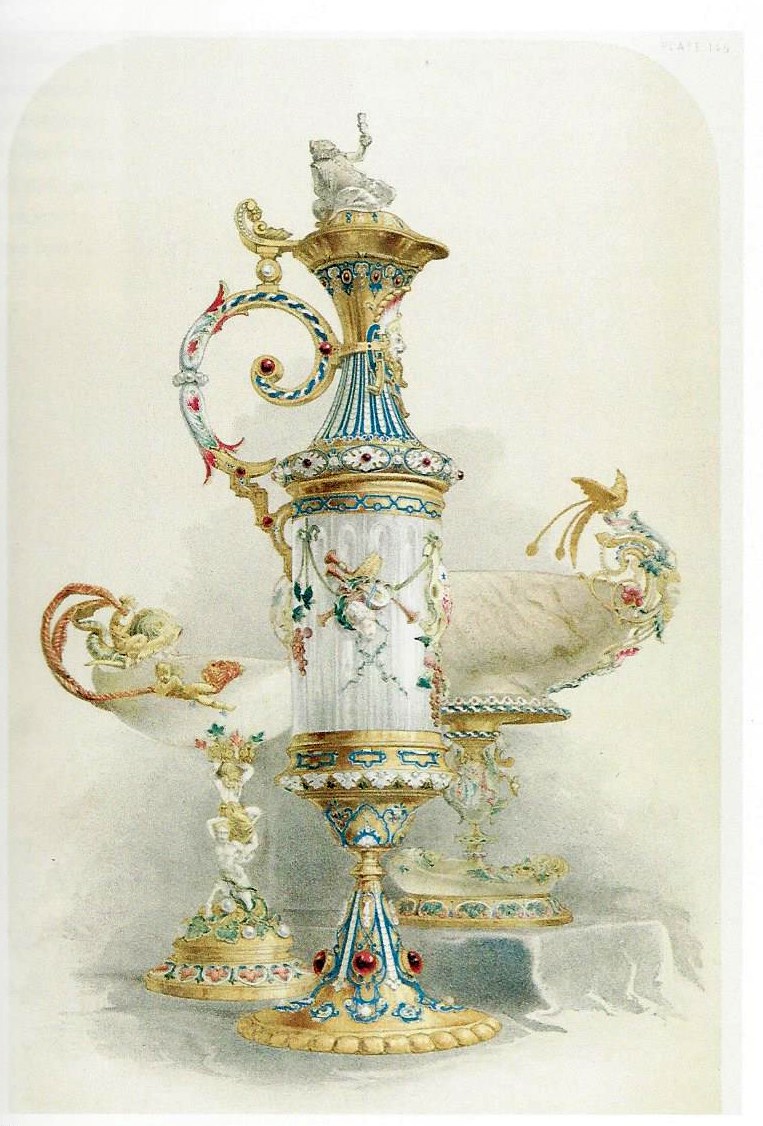 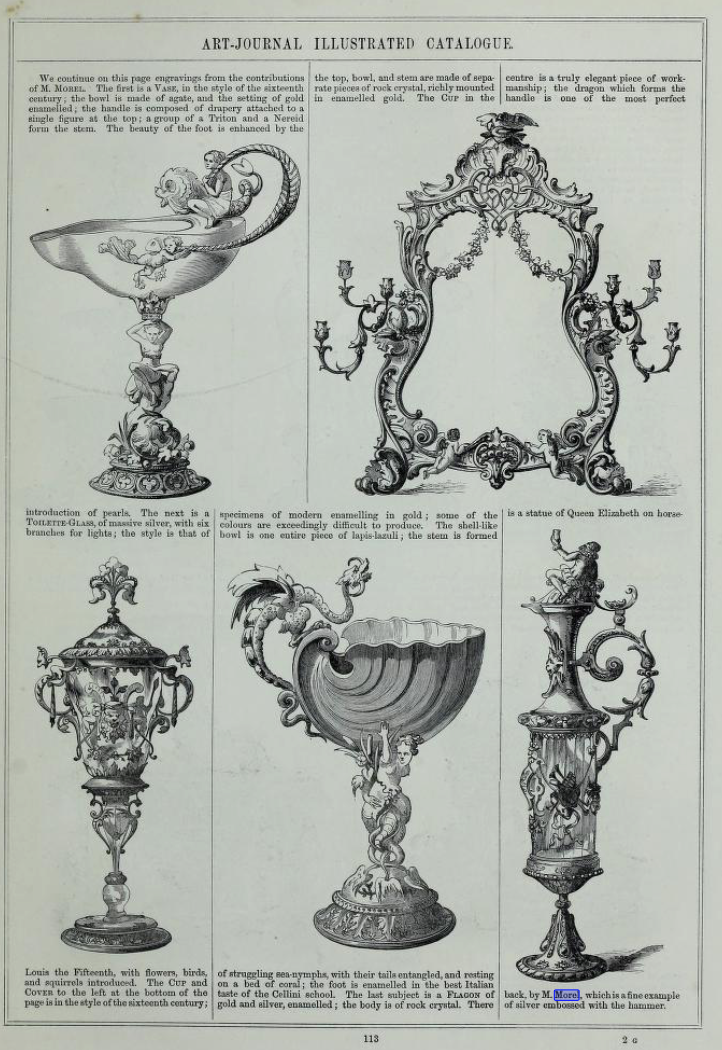