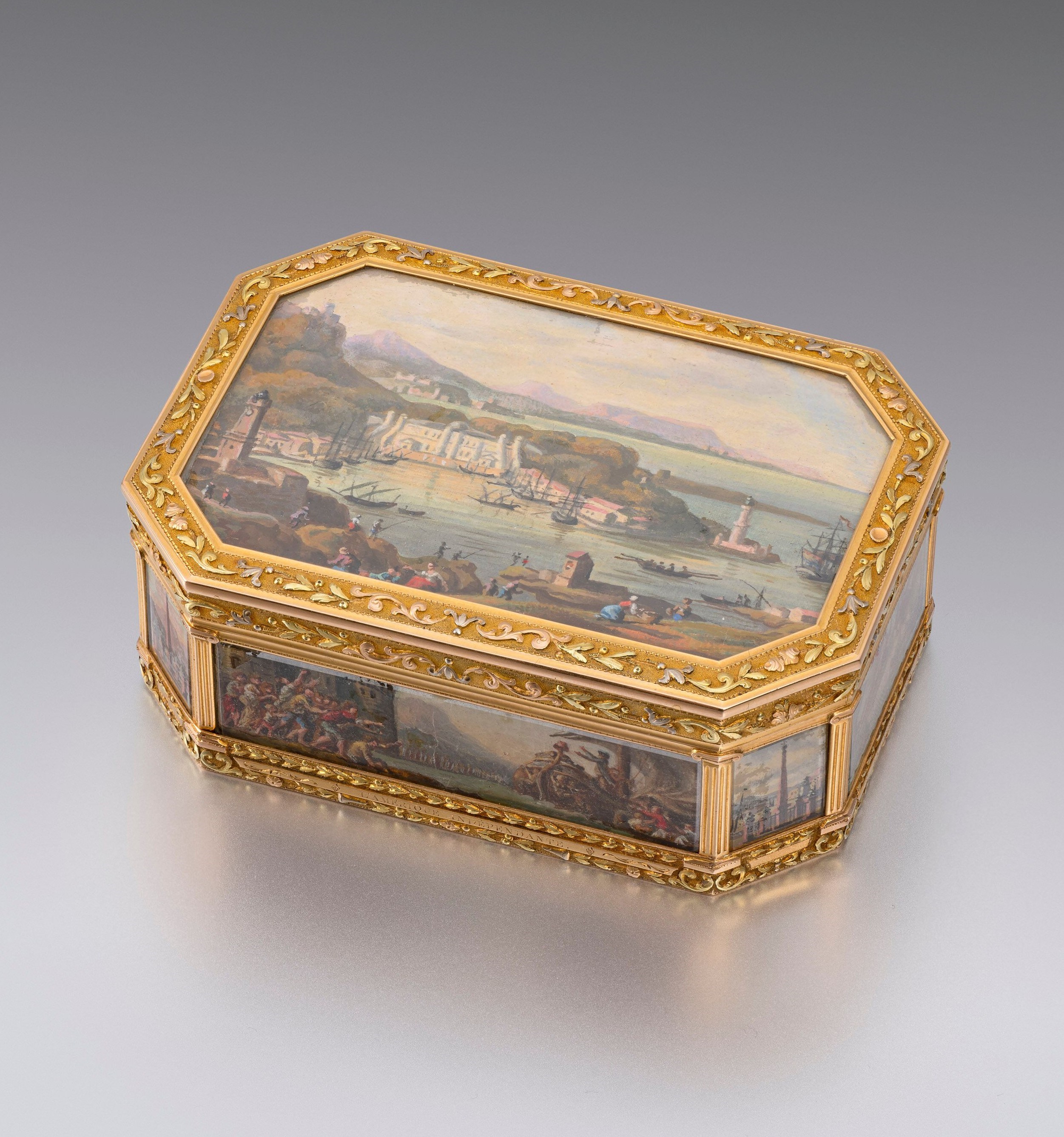 Of rectangular cut corners shape in four colour gold with glass panels containing miniature watercolour views, of which one is signed J F Genillion for Jean Baptiste François Genillion (1750- 1829). The borders in vari-colour gold decorated with foliage and framed by ionic columns.
The gold lined interior with the inscription: “Inscription sul l’Obelisque. Du règne de Louis XVI. Ce port sera à jamais un monument de sa bienfaisance, un refuge a toutes les nations, un asile à la marine militaire et un motif de reconnaissance envers un monarque qui ne règne que par ses bienfaits. MDCCLXXX” (In the reign of Louis XVI. This port will always be a monument of his benevolence, a refuge for all the nations, a shelter to the military navy and a reason of gratitude towards a monarch who reigned for nothing but his good actions. 1780).

This historical and important gold box marks a very significant episode of political history.
In the year 1780 an obelisk was erected in the main square of the town of Port Vendres, in the French region of the Eastern Pyrenees.
The monument paid homage to the benevolence of the King Louis XVI for recognising the Independence of the United States of America in the 1780 Treaty of Versailles. 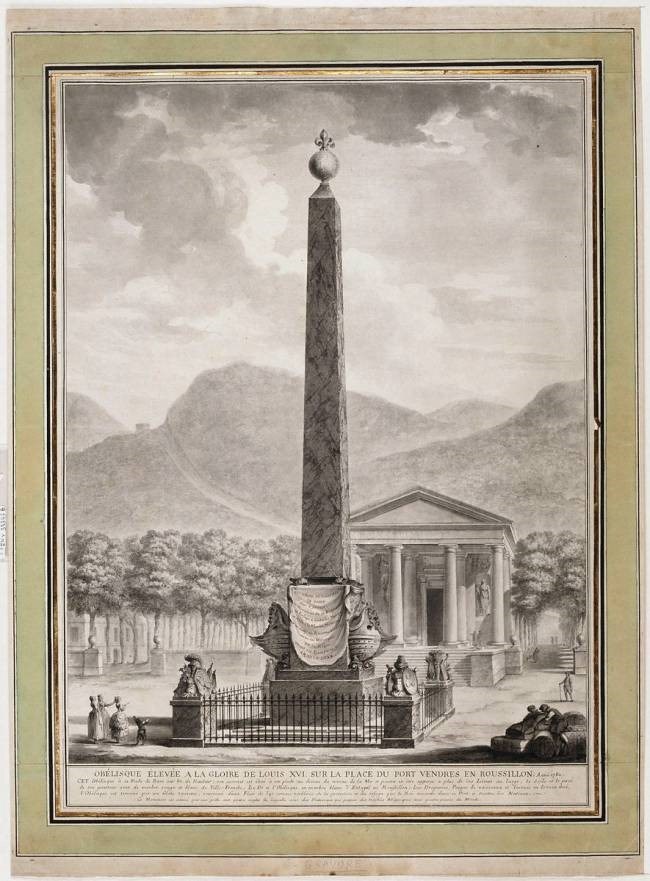 The town of Port Vendres was chosen to host the monument for being the conventional point zero in geographical measuring in the French system, from which elevations are evaluated, allowing metric measuring of the altitude of all other countries.
The town gained importance in the XVIII Century, due to its strategic position being the last French port before the border with Catalonia, and it was chosen as the one of the major ports for commerce with the United States.
In the 1770's, Comte de Mailly, Lieutenant General of the province of Roussillon, was in contact with Benjamin Franklin (see extract from letter below) and was involved in France’s support for the thirteen states in their fight for independence from Britain. He also wanted to make Port Vendres a modern site and the royal architect, Charles de Wailly, was asked to design the prospect of the heart of the town: the port and the main square centred by the Obelisk in a modern Neoclassical style. 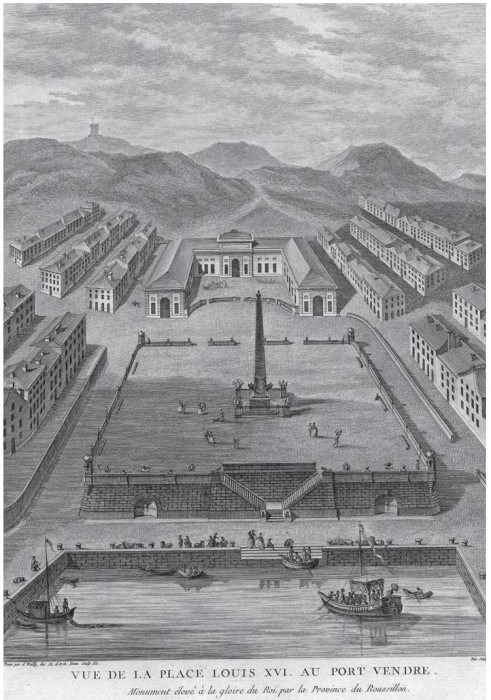 The Obelisk, which is illustrated on the base of this box, is still standing in the central square and it is in marble, crowned by a globe surmounted by a fleur-de-lys. It rests on four turtles that refer to the four continents as the four classical trophies at each corner also do.

The four frontal sides of this box show the contents of the four panels designed by Charles de Wailly that appeared around the base of the obelisk and they each bear an inscription with a description of the scenes. 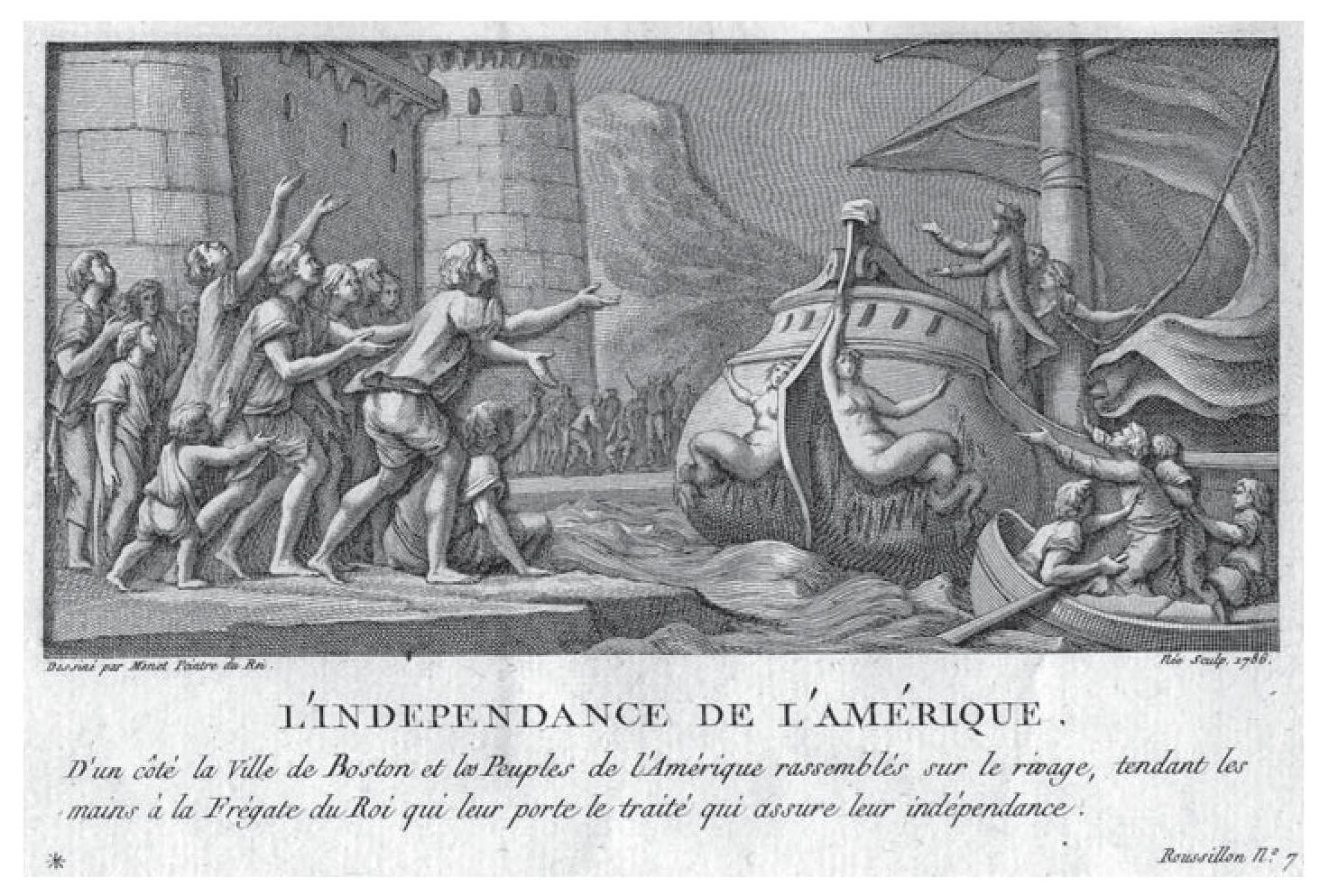 “L’Amérique indépendante” shows the Royal frigate ship of King Louis XVI, la Sensible, entering the port of Falmouth, Massachusetts, in 1778 to support the treaty of allegiance and friendship of commerce signed with the newly born American State. On the stern of the boat is a Phrygian cap, symbol of both the French and the American revolution. It is of particular significance the fact that this decoration was chosen to appear on the frontal side of the base, the side facing the entrance of the port, greeting the incoming boats with such a powerful message of democracy, modernity and hospitality. 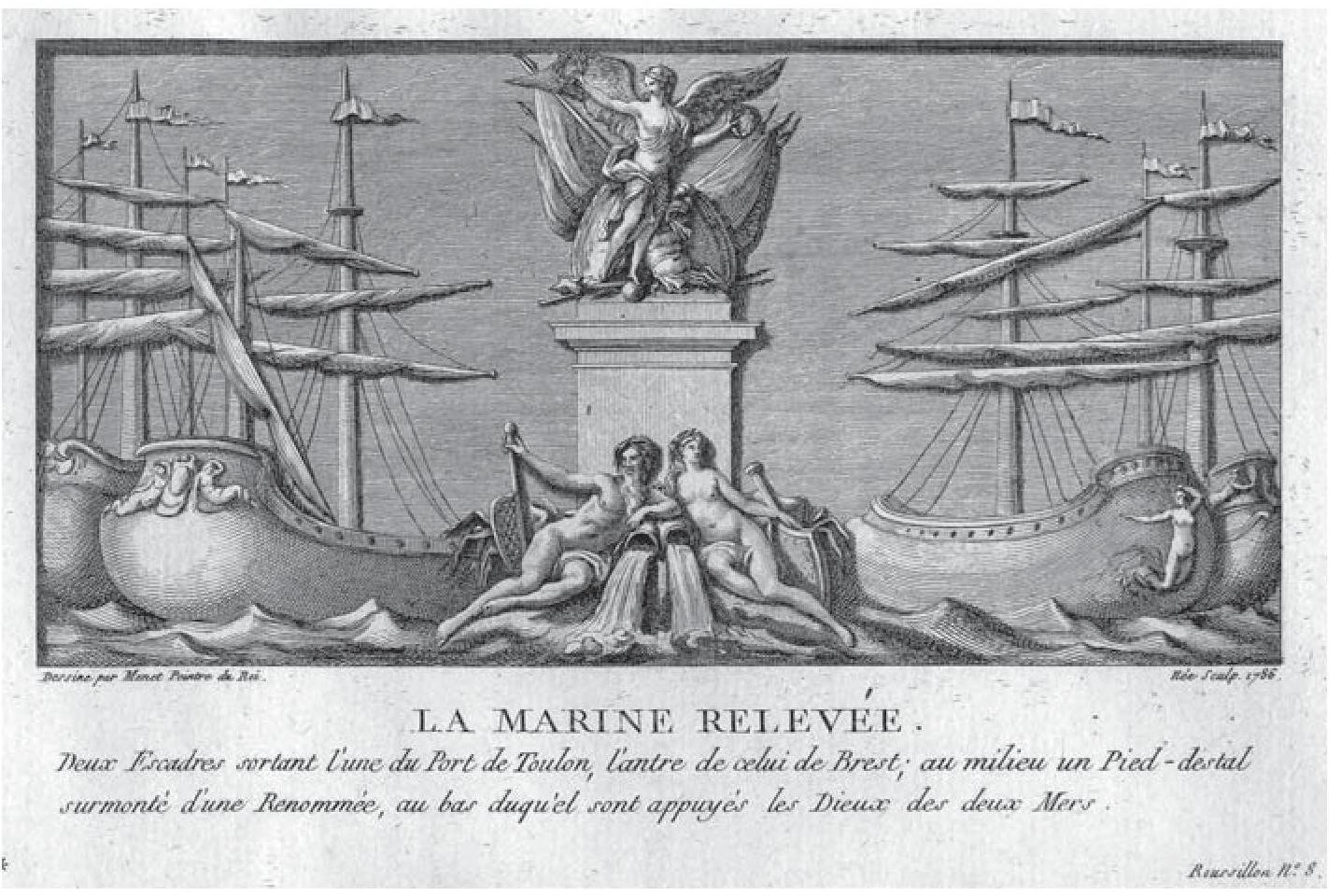 The left side displays “La Marine Relevée”, celebrating the port of Toulon, the northern principal base of the French navy, and the port of Brest, the southern and second most important port, meeting between “The Two Seas”, the Mediterranean Sea and the Atlantic Ocean thanks to the Canal du Midi, while a personification of Glory presides. 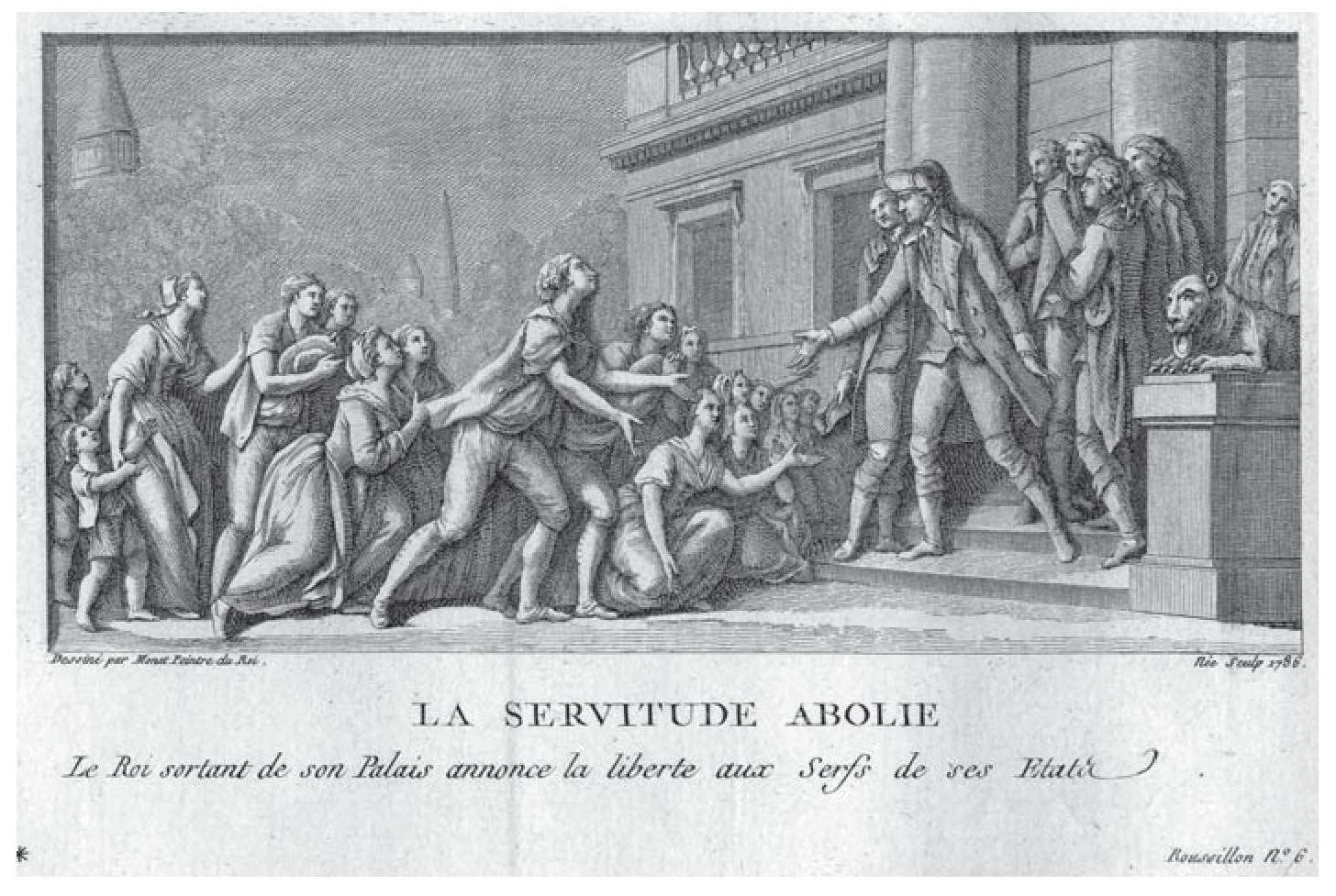 The third side displays “La Servitude Abolie”, showing the King exiting the Palace to proclaim the freedom of the “Servants of the State” directly to his grateful people. 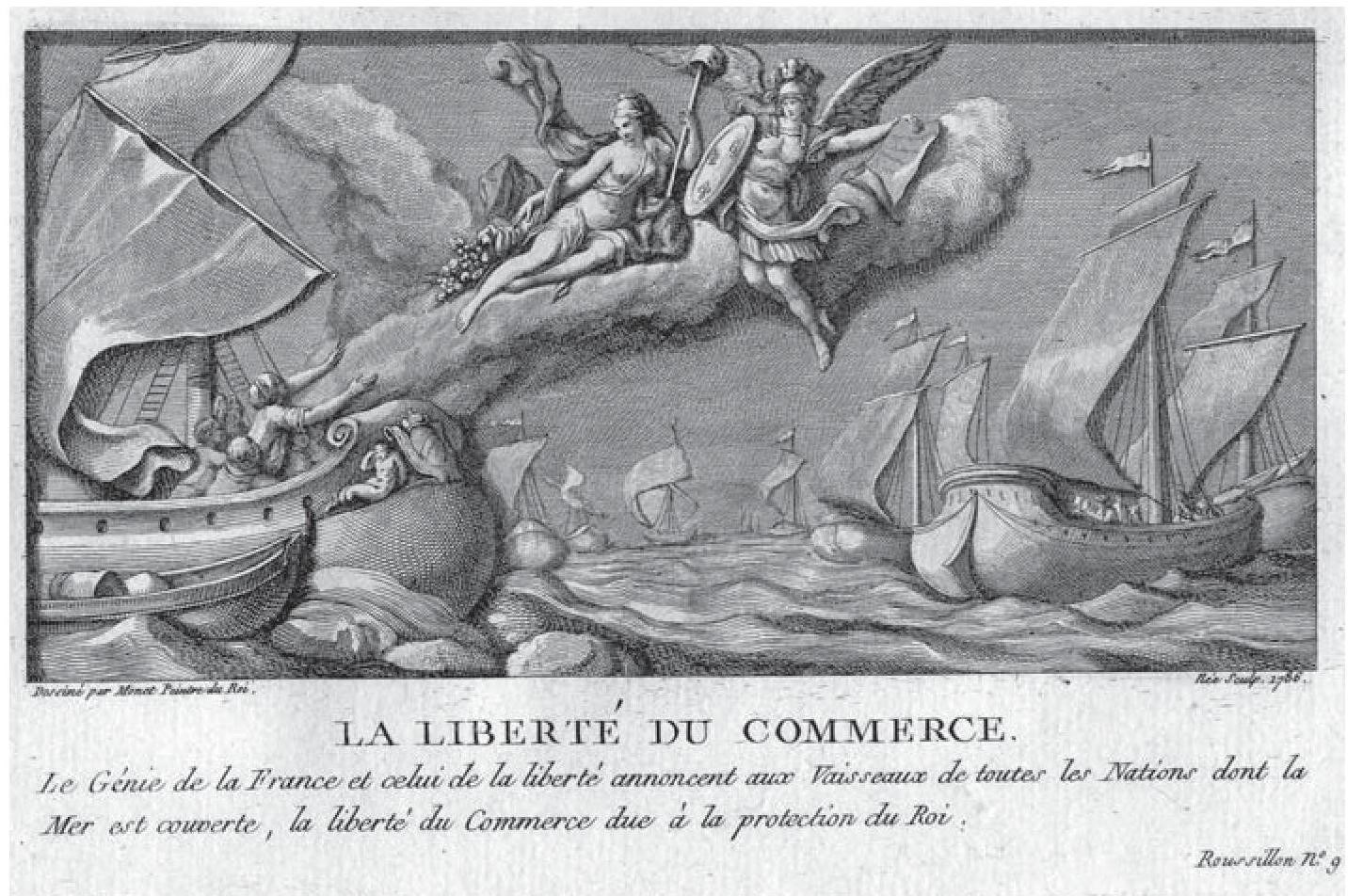 “La Liberté du Commerce” concludes the narrative, with the personification of France and that of Freedom announcing to all nations the freedom of trade under the protection of the King.

These four bronze plaques, that used to adorn the base of the monument, have been removed in 1793, together with four naval ornaments, but were preserved, restored and applied again in 1989. The richly symbolic images on the panels are also documented in a lithograph currently in the City Library of Toulouse, and in a series of drawings, currently in the Metropolitan Museum of New York, proving the popularity and importance of the theme. 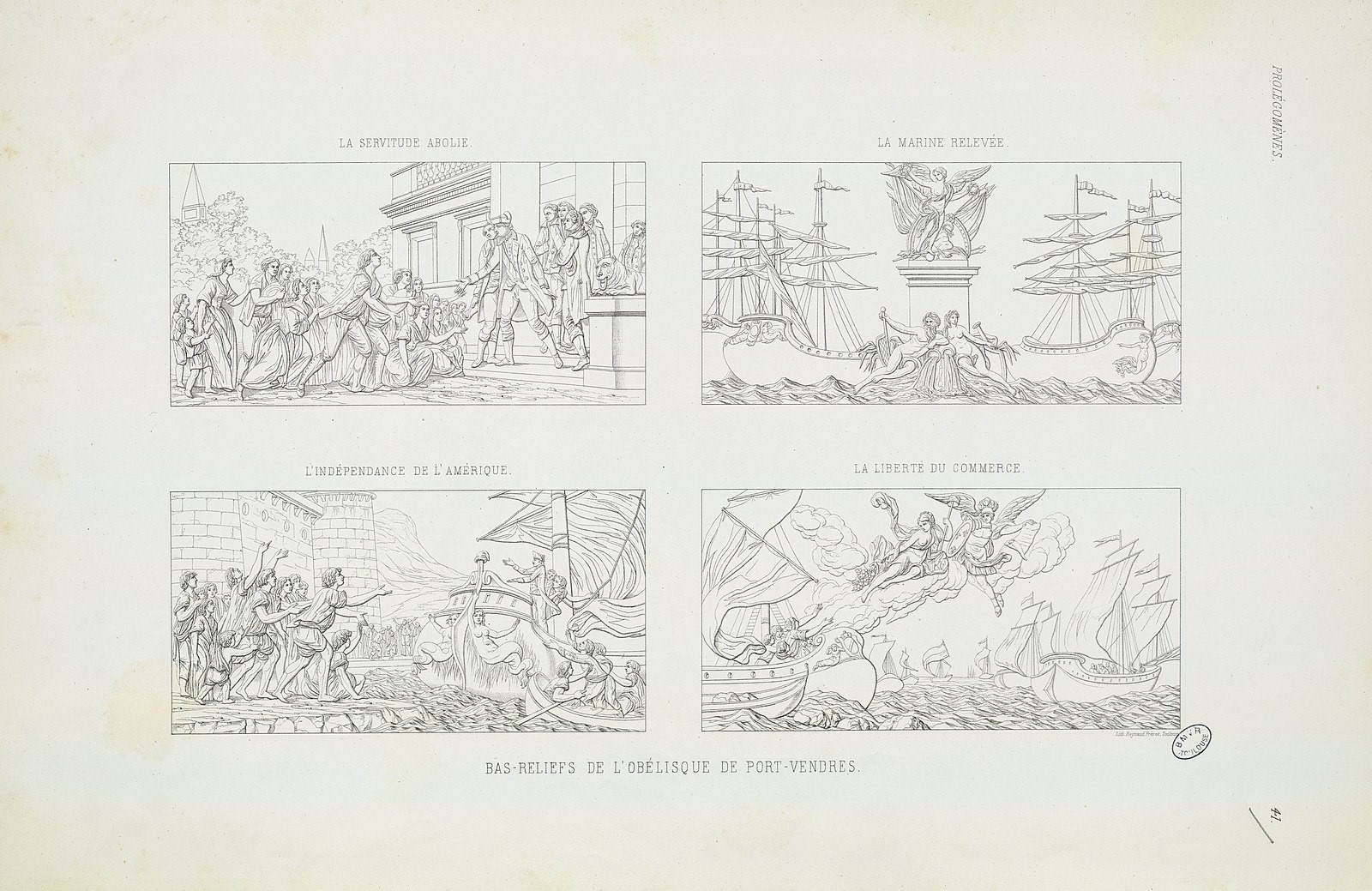 The painter Jean Baptiste François Genillion, who painted the watercolours on the box, was known in his days for his realistic representations of marine subject and harbours’ views, and his hand is recognizable in the two views of Port Vendres that he adds to the top and the bottom of this box. The top shows the view of the bay, the inhabitants of the town immersed in their calm and diligent daily activities. The bottom shows the Obelisk standing proud against the dramatic scenario of the Pyrenees mountains. The four cut corners are also decorated with incredibly detailed views of the monument seen from the four different sides.

The recognition of the Independence of the United States of America operated by the French King Louis XVI is an act of extraordinary importance and of unprecedented modernity as the King was always a supporter of the American emancipation from the British Empire. He was enlightened by the progressive ideas of Benjamin Franklin who, in those years, was a commissioner for the United States at the French court actively preaching in favour of religious tolerance and freedom from the British Empire.
It is clear from the themes and the style of the panels on this box that Louis XVI was keen to present himself as a much more enlightened sovereign than his predecessors, whose despotic monarchic approaches lead to the revolutionary ideas that started circulating in France.
His modesty is told by the way in which he is depicted in these images, as he abandons any regal attributes to present himself as a more common citizen, barely recognizable among the crowd of noblemen in his first-hand approach to state policies.

The inscription inside the box quotes the dedication of the Obelisk to the Monarch, presenting him as an extremely generous King, devoted to guarantee peace for his people and dignity for all nations, including the newly founded United States of America as an example of democratic values in a time of corrupted policies in the old continent of the Ancien Régime. 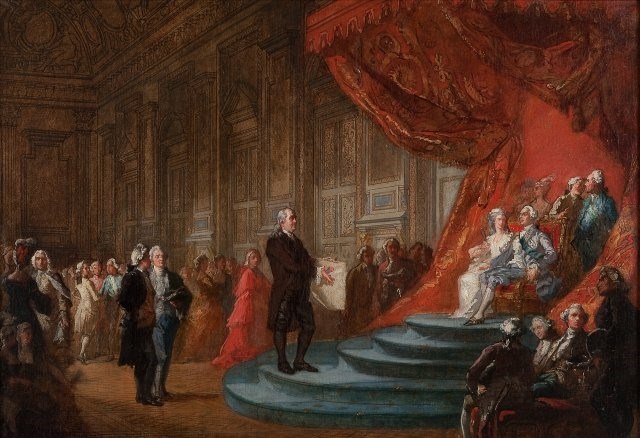 The goldsmith Jacques-Félix Vienot was based in rue de Harlay, St. Bartholomew parish. He was apprenticed to Jean-Barthélemy Nivert and registered his mark on 20th April 1785, a crowned fleur de lys, JFV, a star and two grains.