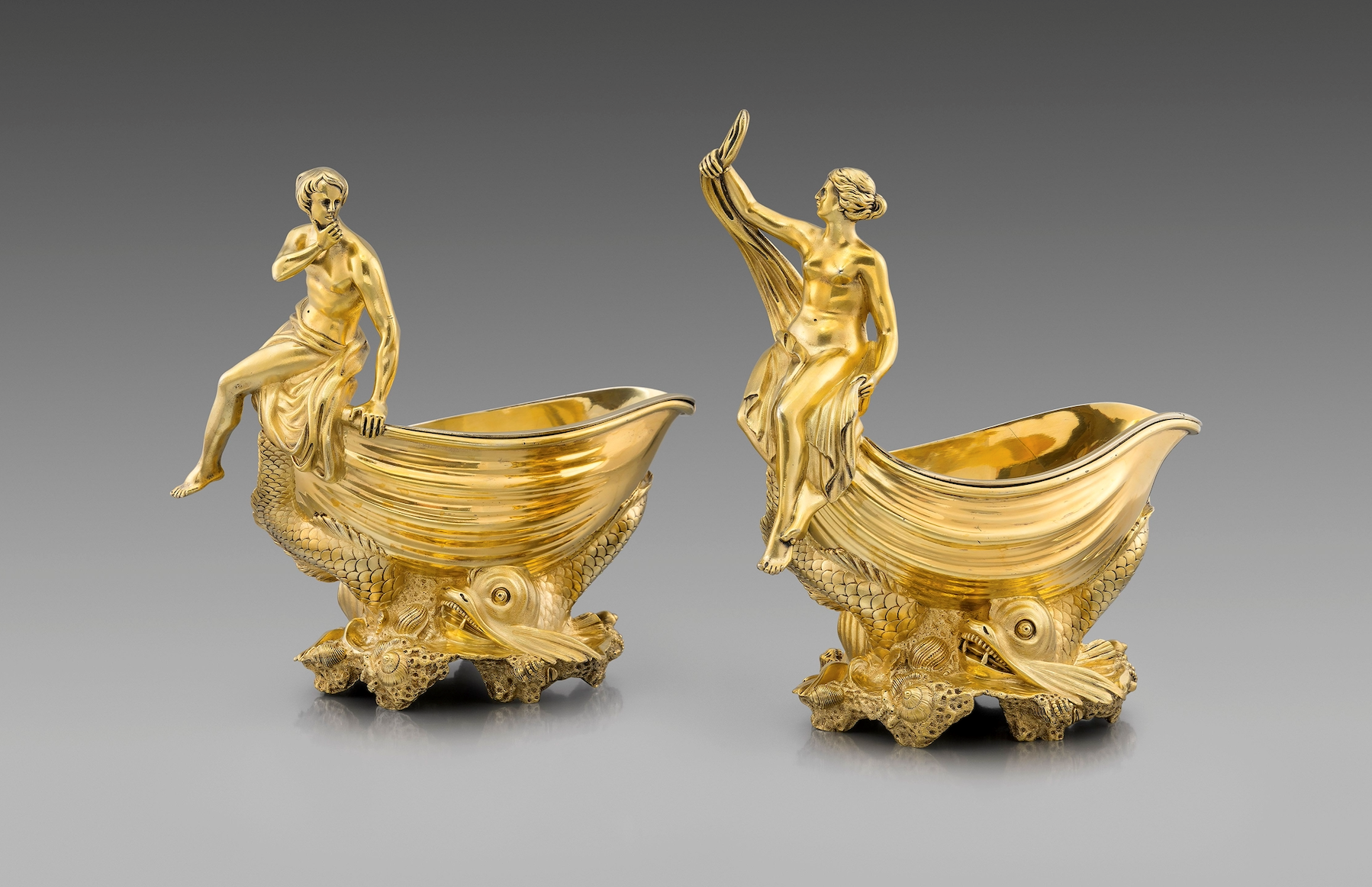 Today we would like to present a pair of exceptional sauceboats that is amongst our most recent acquisitions.
They are marked by Robert Garrard II and date to 1820. Each one is shaped as an oval vessel that rests on a base of dolphins and shellwork. The handles are formed as Venus, narcissistically admiring her reflection in a hand mirror, and Adonis, who stares at his companion in a pensive pose. The detachable liners are marked by Sebastian Crespell II.
They are a very special piece as they are modelled after the pair in the Royal Collection (RCIN 51271) made in 1743-44 by Nicholas Sprimont for Frederick Prince of Wales.
https://www.rct.uk/collection/search#/4/collection/51271/sauceboat-and-stand


The story of our sauceboats is closely linked to the incredible Marine Service that fascinated scholars for centuries as some of the most incredible master silversmiths took part in its creation.
Frederick, Prince of Wales (who lived between 1707 and 1751) was a man of refined taste and elegance. He had access to some of the finest makers that, right in those years, were pioneers in spreading the French taste throughout England. The French Huguenot community was settling in their new elected land after escaping the terrible persecutions that forced so many talented artisans out of France. Fortunately, they were able to bring with them their most valuable asset, their skills, and that is how the Rococo style reached spectacular results in England.

The Royal Collection’s Marine Service is the most majestic group of English Rococo plate and it truly represent the incredible creativity and magic of the English Rococo which clearly found its most natural expression in silver items, thanks to the material’s fluidity, ductility and splendour.
The Royal Collection records mention the Prince’s taste for fish and seafood dishes, which found fertile ground with Rococo’s basic aesthetic principle of using elements of the natural world to create astonishing compositions and dramatic pieces.
According to silver historian C. Oman, Nicholas Sprimont started working on the Royal Collection’s Marine service shortly after his arrival from France into England. Having not been able to register his own mark, his colleague Paul Crespin marked the first and largest piece in the Service, the Neptune Centrepiece, as it was common practice amongst silversmiths at the time.

Throughout the decades, a number of English silversmiths copied items from the Marine Service as the Service was immensely popular amongst aristocracy due to its refined execution and theatrical presence. The Service was so treasured that George IV commissioned in 1827 an even grander stand for its Neptune Centrepiece, nearly 100 years after it was made, to keep the piece relevant in the ever-changing royal taste.
Its magnificent marine elements were extremely influential to the development of the Regency and George IV taste for spectacular pieces. The workshop of Rundell, Bridge and Rundell studied the pieces carefully before being able to design elements that could complement the style of the Service and, by 1820, virtually identical architectural marine elements can be found on a vast number of important pieces produced by Paul Storr and some other makers with royal association.
In 1803 Robert Garrard marks an extraordinary set of Four Gilt Wine Coolers for the 3d Baron of Grantham. The elaborate bases, of intertwined dolphins, is directly inspired by the Marine Service, proving how Garrard was already familiar with its astonishing details even before producing the sauceboats.

We believe the present pair, marked by Robert Garrard and dated 1820, to be the same set that came to the market, through Christies’ auction house, as part of the majestic C. Ruxton and Audrey B. Love Collection, one of the greatest collections in the world of silver gilt pieces.
https://www.christies.com/lotfinder/Lot/a-pair-of-george-iv-silver-gilt-sauce-4336432-details.aspx
Another pair was also sold at Christies in April 2004.
https://www.christies.com/lotfinder/Lot/a-fine-pair-of-george-iv-silver-gilt-4263011-details.aspx
The Virginia Museum of Fine Arts has two pairs of a very similar model, 97.68.1a-b, but executed in white silver, proving how popular this extraordinary design was.

It is not surprising that Robert Garrard II, silversmith and goldsmith to the Crown, is asked to produce more pieces modelled after the Marine Service items (for a similar case see a coffee pot from the collection of the Victoria and Albert Museum M.18-1981, modelled by Garrard in 1835 following a famous Rococo model of 1760).
By reproducing the Marine Service, considered as it was the most iconic Rococo group of plate, Garrard was pursuing the very common practice of paying homage to the grand masters that shaped English art history, carving out a place for himself amongst them.