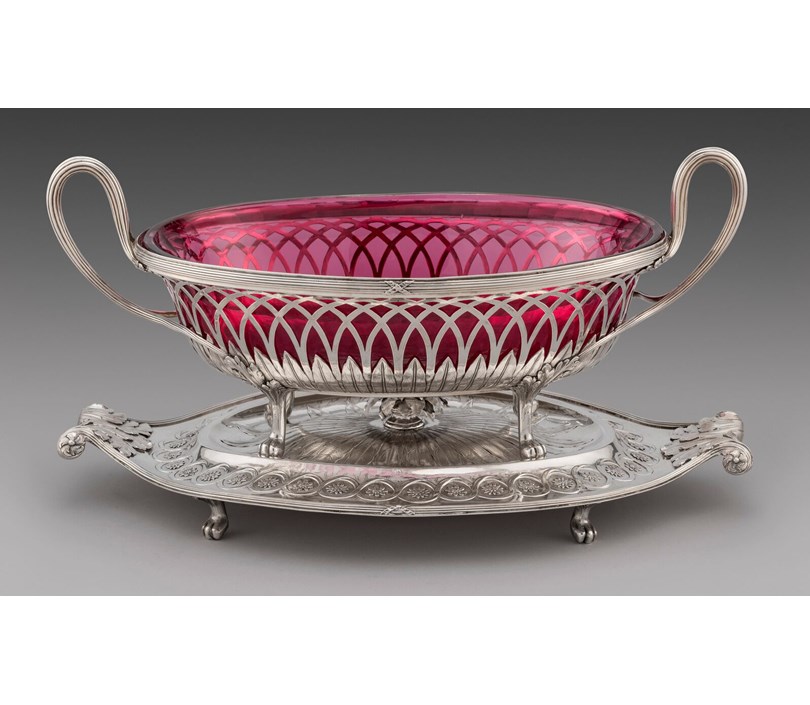 The two-handled pirced oval bowl on four scroll supports with paw feet, chased with a band of stiff laurel leaves, with pierced Gothic-type arches, bifurcated reeded loop handles and reed and tie border. The base on four foliage and paw feet with acanthus chased scroll handles, the border chased with guilloche enclosing applied paterae, the centre with applied flowerhead on a calyx of laurel leaves, reed and tie border, with red glass liner.

George Heming was the son of royal silversmith Thomas Heming Citizen and Goldsmith of London. He was apprenticed to his father 2 March 1763. His Freedom at the Goldsmith’s Hall is unrecorded. He appears as George Hemming, goldsmith, Piccadilly, in the Parl. Report list 1773, showing he had entered a mark, presumably in the missing register before that date. His hallmark is entered as plateworker, in partnership with William Chawner, 17 November 1774. Address: Bond Street. Second mark, Is February 1781. Address: Old Bond Street. Heal records G. Hem(m)ing, goldsmith and jeweller, Hand and Hammer opposite the Black Bear Inn, Piccadilly, c. 1760-73, but from the apprenticeship above the first date is either a mistake or refers to another. Heal also finds George Heming and William Chawner, plateworkers, King's Arms, New Bond Street facing Clifford Street, 1773-81; and Heming alone, at New Bond Street, I784-93, which makes it quite clear that they were successors to Thomas Heming at the same address. 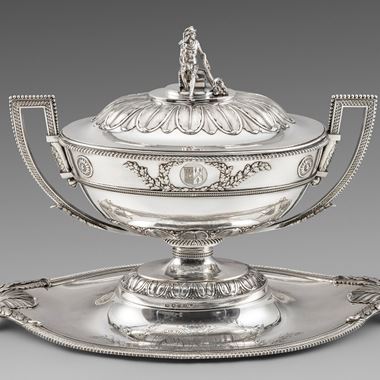