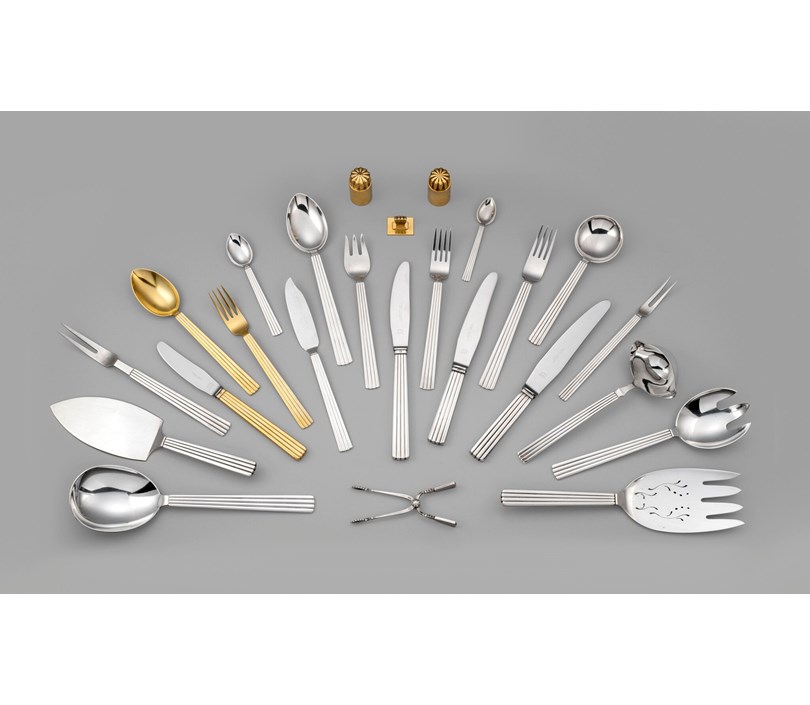 The Bernadotte pattern was first produced by Jensen in 1939. Bernadotte was the son of Gustav Adolf VI, king of Sweden and brother of Ingrid, queen mother of Denmark. As a young man he wanted to become an actor, but his father and grandfather didn't approve so he studied art history at Sweden's Uppsala University. He attended the School of Decorative Arts in Stockholm and became committed to designing practical, useful things that were stylish and beautiful not beautiful ornamental things with no purpose.

At the age of 23, he began to design for the Georg Jensen Silversmiths. His designs were a departure from what was thought of as the Jensen style. He introduced clear cut disciplined forms common in modern Swedish taste to the Danish Silver tradition. His elegant and distinguished designs show a preference for geometrical figures, spheres, cylinders and funnels enhanced with engraved lines, profiles and soldered parallel fluting.

After leaving the Georg Jensen Silversmiths, Bernadotte created industrial designs and in 1950 he formed a partnership with the architect Acton Bjorn, Bernadotte & Bjorn Industridesign. The firm designed many different products ranging from calculators to office refrigerators. In 1964, an offshoot of the firm, Bernadotte Design with Sigvaard Bernadotte at its head was created and it became the largest design consulting firm in Northern Europe.

Bernadotte experimented in all areas of design including designing sets for Hollywood movies.

Bernadotte was a major figure in the field of Scandinavian industrial design and a leader in the Society of Swedish Industrial Designers and the International Council of Societies of Industrial Design.

Georg Jensen, (born August 31, 1866, Raadvad, Denmark—died October 2, 1935, Copenhagen), Danish silversmith and designer who achieved international prominence for his commercial application of modern metal design. The simple elegance of his works and their emphasis on fine craftsmanship, hallmarks of Jensen’s products, are recognized around the world. Jensen was apprenticed to a goldsmith at age 14. His artistic talents were briefly focused on sculpture, but he returned to metalwork, primarily jewelry and silver pieces, produced in the workshop he opened in Copenhagen in 1904. Jensen exhibited his works at several major foreign exhibitions (winning a gold medal at the Brussels Exhibition of 1910) and quickly built a reputation as an outstanding and highly original silversmith. He moved to a larger workshop in 1912 and acquired his first factory building in 1919. Jensen’s silverware achieved immediate popularity and commercial success. He was, in fact, the first silvermaker to realize a profit from the manufacture of modern silver. Until Jensen’s time virtually all successful silverware producers had relied on a standard repertory of popular traditional designs. Jensen, however, found that the market for his sleek, simple pieces was larger than anyone had predicted. His firm grew rapidly, expanding throughout Europe and opening branches in London and New York City. On both continents Jensen’s work set trends for contemporary tableware. He was among the first designers to fashion steel—formerly considered fit only for low-quality, inexpensive flatware—into handsome, serviceable cutlery. By 1935 the firm had branches all over the world and carried more than 3,000 patterns in open stock. Out of fairness to his customers, Jensen refused to discontinue old patterns, a practice common among manufacturers of fine silver and tableware. After his death the business was carried on by his son, Søren Georg Jensen. In 1973 the company became part of the Royal Scandinavia Group. 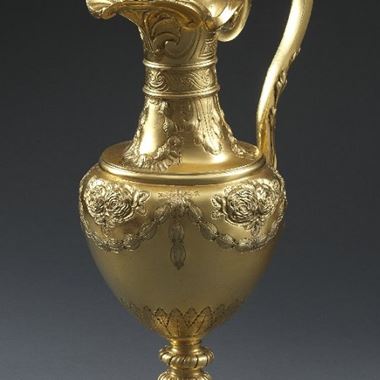 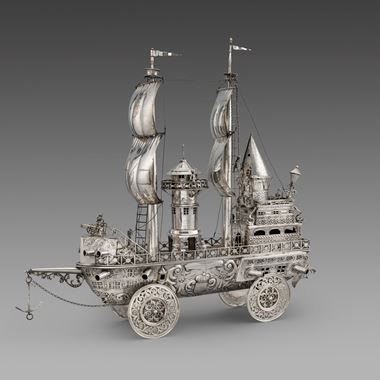