Martin-Guillaume Biennais was born into a modest family in the Orne region (Lower Normandy), in 1764. He was trained as a craftsman and settled in Paris in 1788 as a tablet-maker, i.e., a carver of small wooden or ivory objects. Legend has it that he gave General Bonaparte credit when the latter wanted to set up house on his return from Egypt. In exchange for this trust, his fortune was made since Bonaparte made it possible for him to extend his activities to gold smithery and called upon his services during the Consulate. He commissioned the regalia used at his coronation, in 1804, from Biennais and finally appointed him First Goldsmith. Members of the imperial family and high-ranking court officials became his clientele. Biennais opened shop in the Rue Saint-Honoré, under the sign Au singe violet, where, as his success continued to grow, he employed a large number of workmen. He was a dealer and a brilliant manager and was commissioned to supply the Imperial household with silver to the value of 720,199 francs, in celebration of the birth of Napoleon II. Among the finest of Biennais's necessaires was one made for Napoleon, 1806 (Louvre, Paris). It contains 86 exquisitely wrought silver items, including toiletries, writing equipment and a table service all neatly fitted into a leather box. Biennais's necessaires were also extremely popular among officers serving the Napoleonic Campaigns. Biennais was patronised by other members of the Imperial family, particularly Queen Hortense as well as numerous private clients. In addition, he was much in demand abroad; in 1806 he made the crowns, orb, sceptre, and sword for the coronation of the King of Bavaria. He supplied large dinner services to the Florentine Court as well as the Russian Imperial family. Biennais devised a unique type of service for such clients. Each piece was of a simple, elegant, and neo-Grecian form, plainly decorated but adorned with an engraved or cast ornament which bore symbolic significance to its particular patron. Biennais rarely designed the pieces himself but employed a team of draughtsmen. For the more important pieces of Imperial plate, he used designs by Charles Percier (1764-1838) and Pierre-Fran9ois-Leonard Fontaine (1762-1853) (largely responsible for creating the Empire style). 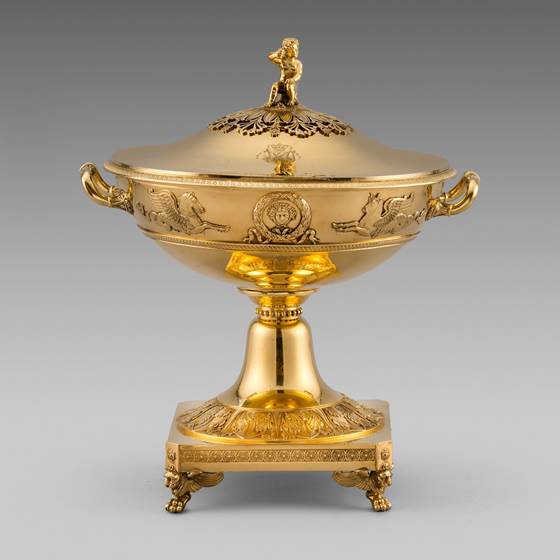