René Boivin (1864-1917) was a talented jeweller, designer and engraver. After completing his apprenticeship and being acknowledged as a master jeweller by the age of 25, he established the company which bore his name in Paris. While he produced superb jewels in the fin-de-siècle Art Nouveau and ‘Garland’ styles, he also showed a nascent, distinctive aesthetic of his own, as demonstrated by his strikingly avant-garde Merovingian and Egyptian Revival-style jewels, and his use of yellow gold at a time when platinum jewels reigned supreme. In 1893 he married Jeanne Poiret, the daughter of the cloth merchant August Poiret. This match was particularly fortuitous, as Jeanne's brother, Paul Poiret, had made a name for himself as one of the most fashionable and exclusive couturiers in Paris. Thus began a symbiotic and harmonious relationship between the houses of Poiret and Boivin - Poiret’s business brought in an extraordinary roster of wealthy and sophisticated clients, and Boivin’s jewels beautifully complemented Poiret’s designs. Under this arrangement, the house of René Boivin prospered, known among elite circles on a ‘word of mouth’ basis, becoming known as the ‘jeweller to the intelligentsia’. However, in 1917, tragedy struck. Both René Boivin and his son perished as war engulfed Europe. For most family businesses at the time, let alone the famously male-dominated world of jewellery design, that would have been the end. For the newly widowed Jeanne Boivin, however, that was not the case. Determined to continue the business, Jeanne Boivin persevered. Hiring a then unknown sales girl and art graduate named Suzanne Vuillerme as a designer, the house of Boivin went on to produce some of the most idiosyncratic and stylish jewels of the early 20th century. Virtually ignoring the broader landscape of jewellery design and following their own path, Boivin and Vuillerme (who would later go by her married name, Suzanne Belperron) created jewels in a sensuous, abstract style, taking inspiration from the natural world and making use of unusual materials and carved stones. The aesthetic was so uniquely theirs that the house of Boivin did not bother to sign their jewels – a philosophy that Belperron later continued after she branched out on her own, famously declaring ‘my style is my signature’. After Belperron’s departure in 1931, the female-led Boivin atelier would benefit from the vision of another designer, Juliette Moutard, as well Boivin’s own daughter Germaine. During this period, Boivin’s designs were once again significantly ahead of the curve, becoming more playful and figurative as most other jewellers continued to embrace the abstract geometric severity of late Art Deco. These designs reflected Moutard and Boivin’s love for flowers and animals, as well as seashells and other marine motifs. Their distinctive style attracted a great number of prominent collectors, including Elsa Schiaparelli, Empress Nam Phu’Ong of Vietnam and Claudette Colbert. Germaine Boivin continued to work with Juliette Moutard after Jeanne Boivin’s death in 1959, and eventually sold the firm to Jacques Bernard in 1976, who was working for them as a designer and was well-versed in the house’s style. Boivin was sold to the Asprey Group in 1991, and eventually closed its doors. Boivin’s jewels have experienced a huge resurgence of interest in the last decade, and their pieces are once more highly sought after for their unique style, and rightly recognised for their groundbreaking contributions to 20th century jewellery design. 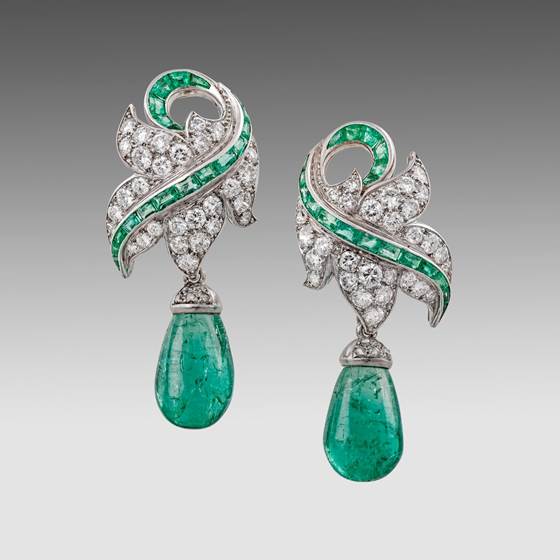