Very little is known of the silversmith Christian Hillan, who flourished in London for a few years from the time of entering his first mark as a plate worker on 20 April 1736. His name, it is thought, suggests that he may have been a Scandinavian immigrant. His most productive period seems to have been immediately following his move about 1740 to the sign of the Crown and Golden Ball, Compton Street, Soho. His vacated premises there were subsequently taken by William Cripps who at that time (1743) was a next-door neighbour of Nicholas Sprimont. All three silversmiths worked in the fashionable rococo style but whereas Hillan disappears from the records in late 1742 or early 1743, and Sprimont went on in the mid-1740s to open the Chelsea porcelain factory, Cripps moved in 1746 to St. James's Street where he successfully continued the business established by David Willaume. a rare maker who is associated with the group of foreign-trained craftsmen in the circle of Paul de Lamerie. Along with the German immigrant James Shruder, the Liege-born Nicolas Sprimont and the French Huguenot Paul Crespin, Hillan brought Continental-inspired rococo fashion to the Lamerie group. Until 1742 Hillan occupied premises in Compton Street, Soho, next door to Sprimont, and it is likely that he did work for, or supplied silver to, the Lamerie group (see Christopher Hartop, The Huguenot Legacy, English Silver 1680-1760 from the Alan and Simone Harman Collection, 1996, p. 304, for a coffee jug by Hillan with scenic rather than sculptural decoration). It is not certain whether Hillan's origins were German or Scandinavian. Some works by Hillan are related to the published engravings of Caspar Gottlieb Eisler of Nuremberg, which in turn owe a debt to the designs of Juste-Aurle Meissonnier, one of the earliest and most influential proponents of the rococo style. The German interpretation of this essentially French style are characterized by a boldness of outline, seen in the shells and scrolls of both the Eisler print and his pieces, and the fan-like, "bat-wing" motif which surmounts the shells seen on surviving pieces. Interestingly, German influences can be seen in the designs of a French migre to London, Hubert François Gravelot, who was perhaps the most important promoter of the rococo style in England during his stay there between 1733 and 1745. George Vertue says that Gravelot designed for silversmiths but, apart from a watercolour design for ornament in the Victoria and Albert Museum, which also has "bat's wing" rocaille and a matted background very similar to the decoration on pieces by Hillan, virtually nothing remains to document Gravelot's involvement in silver design during the period (see Mark Girouard, "Coffee at Slaughter’s?" Country Life, 13 and 27 January and 3 February, 1966). Based on this design, it is tempting to suggest Gravelot as the designer to a number of Hillan’s woks and to see Hillan as part of the group of craftsmen, painters and designers who formed part of the group centred around the St. Martin's Lane Academy. Certainly, the highly developed rococo decoration of his pieces places them at the forefront of rococo silver design in England, even among the silversmiths of the Lamerie group. 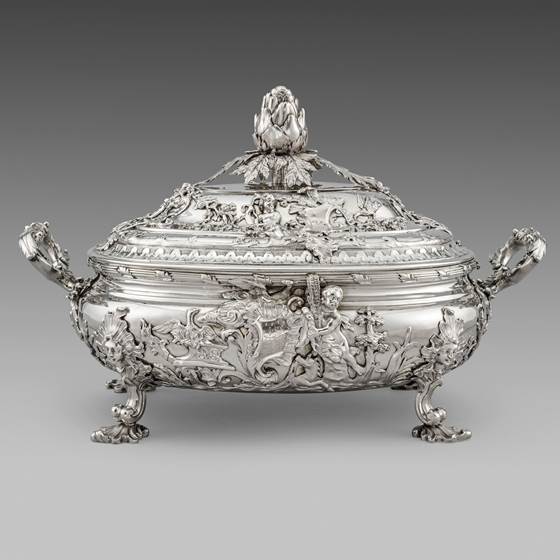