The Wiener Werkstätte is recognized as one of the most important enterprises of the early twentieth century, both in terms of art historical and of cultural history. In May 1903, the architect Josef Hoffmann, the graphic designer and painter Koloman Moser, and the modern-minded patron Fritz Waerdorfer established the now world-famous “Wiener Werkstätte Productivgenossenschaft von Kunstandwerkern” (Vienna Workshops of the Production Cooperative of Craft Trade Artisans). This “productive cooperative of artisans” was conceived with the vision to produce high-quality craftwork to fulfil all manner of everyday needs (including, but not limited to, silverware, furniture, glassware, and porcelain). Among others, the British Arts and Crafts Movement served as a model for the Wiener Werkstätte. Their goal was to “support the economic interest of its members through training and education in the Arts and Crafts; through the completion of objects from every sector of the crafts trade, based on artistic designs conceived and produced by members of the cooperative; and through the construction of workshops and the sale of the merchandise manufactured.” The establishment of such an organization made it possible to manufacture hand made products while ensuring consistently high levels of artistic and quality standards. The first year of production began with the metal and silver workshops managed in a small apartment in the 4th district of Vienna, later relocating to the shutdown wing of a factory on Neustiftgasse 32/34. This new space allowed Hoffmann and Moser to set up gallery spaces and exhibition rooms to display the wares produced by the workshop. At its most productive, the Wiener Werkstätte employed more than 300 craftspeople. The ideology of the Wiener Werstätte was unusually progressive for the time in that its craftspeople were never overshadowed or thought of as anonymous manufacturers, in contrast, they were in close contact with the designers and buyers of their objects and were actively included as part of the holistic workshop process. This cooperative approach fostered collaborative creativity and insisted that no one workshop artists limit themselves to their own discipline but take part in all areas of production. 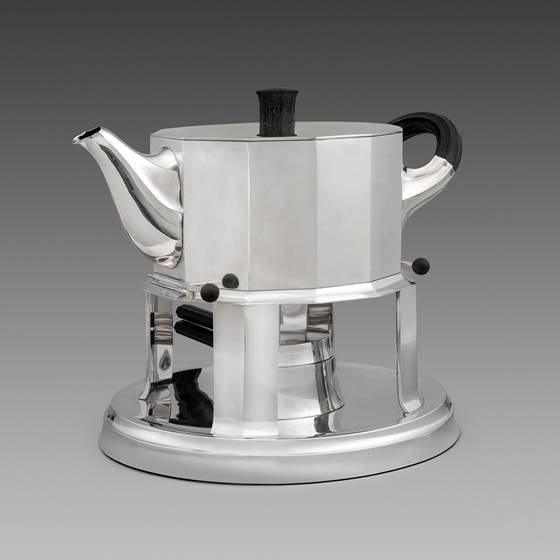