Edward Wakelin, son of Edward Wakelin late of Uttoxeter in the County of Stafford baker, deceased was apprenticed to John le Sage on the 3rd of June 1730 upon payment of £21. He became free on the 7th September 1748. By the 2nd November 1747 he had joined the famous George Wickes at Panton Street, where the latter's ledger records the transfer of 'a mMoiety of Stock in Trade' from Wickes to Wakelin. Between 1747 and 1760, Wakelin's surprisingly similar mark supplanted that of Wickes. Wakelin took up residence at the Panton Street house, the lease being assigned to him in 1748, but it is doubtful that he was truly in control of the business before 1752 as a Wickes and Netheron trade card was issued in 1750. By 1752, Wickes had put down money on a manor close to his birthplace of Bury St. Edmunds in Suffolk and some agreement must have taken place. The formal date of the hand over to Wakelin, and his new partner, John Parker I was dated 11th October 1760 but probably occurred late in 1759. The actual date of commencement of Wakelin's partnership with John Parker I was entered in the missing Goldsmiths' Register but must have been between 1758 and 14th December 1761 when a new mark was entered. In the new mark Parker's initials appear above Wakelin's, suggesting that he became the senior partner at this point. The partnership continued until 1777 when the venture between John Wakelin, Edward's son, and William Taylor commences. Heal duly records Wakelin alone as a Goldsmith, Panton Street, 1747-66 and Parker and Wakelin, King's Arms, Panton Street near St. James', Haymarket, 1759-77. Edward Wakelin was a man of extraordinary business acumen. He bought into an established business and possessed the ability to ensure its continued success. He did so not just by employing assuredly talented, although sadly mainly anonymous silversmiths at Panton Street, and also by outsourcing what he was unable to make either at home or at the King's Arms. Some names of the men who worked in this manner for Parker and Wakelin are recorded in the Workmen's Ledgers, now in the possession of the Victoria and Albert Museum. Two such makers are James and Ansill and Stephen Gilbert. Whilst their work was obviously of high quality, neither entered a mark for the period they worked with Parker and Wakelin. Stephen Gilbert, and James Ansill were both apprenticed to George Wickes after coming to his house as servants, and then continued to work for him. They grew up in villages next to each other. They remained friends, living and working together, probably in the Wickes/Wakelin workshop in Panton Street, where the ledgers give their address. Their output was considerable during the short time they worked as partners: 17,837 ozs in 1767-8 and up to 29,780 ozs in 1772. The partnership was definitely over by 1776 when Heal reports him alone at Panton Street. On the 17th of July 1780 Stephen Gilbert entered a mark in partnership with Andrew Fogelberg that continued until 1793. There is no mention of the retirement or death of John Parker I, although it can be assumed that he retired or dies during 1777. Edward Wakelin retired in 1777 to Mitcham in Surrey, where the March issue of The Gentleman's Magazine records his obituary: "At Mitcham, Surrey, Mr. Edw. Wakelin, formerly a Goldsmith in Panton Street. Died Feb. 1784." 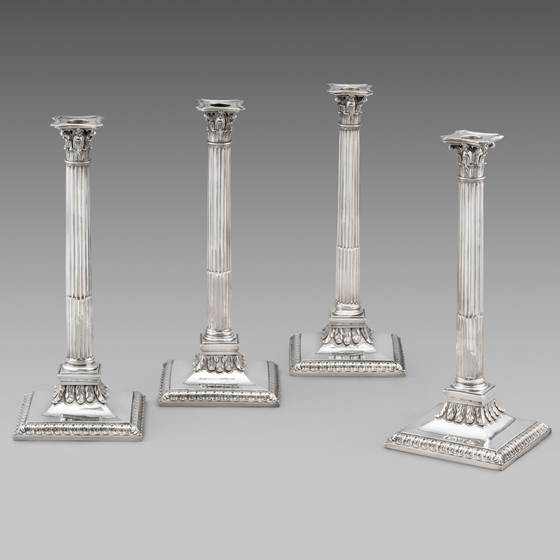