John Tuite was son of James Tuite a merchant of Drogheda. He was apprenticed to John Matthews of Dublin goldsmith in 1703, and working in Dublin from 1710 to 1720, using the same, or a similar hallmark to that entered later in London to which he moved in 1723. He was based in London until his death in 1740. His first hallmark was entered as a largeworker, undated, between September 1721 and July 1725. His address is recorded at Ireland's Yard, Blackfriars. He moved to Litchfield Street, near Newport Market, also undated. His second mark, 27th June 1739. Address: Litchfield Street, St. Ann's, Westminster. Heal records him as goldsmith, Irelands Yard, 1721; Green Door, Litchfield Street, near Newport Street, 1721-39; and George Street, York Buildings, Strand, 1745. This last address may perhaps have been in fact that of Elizabeth his widow Heal also has John Tuite, goldsmith, London, 1763, but this appears probably based on a mis-attributed mark of another maker, or misprint for William (following). In spite of the elegant ewer incorporated in both his hallmarks Tuite appears to have specialized in the making of salvers. 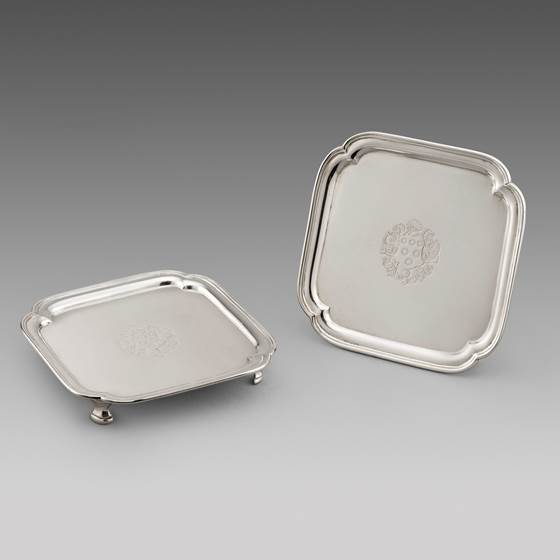