According to Lorenz Selig, the maker's mark EC crowned can be attributed to Esaias Fernau, the Hanau bijoutier who received his Personalfreiheit ('privilege of freedom') between 1761 and 1764 and had formed a compagnie with Daniel Marchand in 1762. Fernau has recently become known for a number of high-quality enamelled gold boxes, most of which are marked with his initials EF. According to Selig, 'EC' could stand for Esaias et Compagnie, and it is well known that the Hanau bijoutiers were able to choose their maker's marks and any variations they wished, and often combined or changed them within a few years (Lorenz Selig, Eighteenth century Hanau gold boxes, Silver Society of Canada Journal, 2015, p. 46-47). A similar mark as on the present lot, with slight variations in terms of the crowned letter, imitating Paris date letters, can also be found on two gold boxes in the Metropolitan Museum of Art in New York and the Musée Cognac-Jay in Paris (see Selig, op. cit., p. 46). Moreover, the Musée du Louvre also owns a number of gold boxes decorated with rather sophisticated enamel painting, marked EC below a crown (Serge Grandjean, Les tabatieres du Musée du Louvre, Paris, 1981, nos 547-552), all of which are of similar format, construction and composition to the present lot, the most similar probably being no 553, which is also painted with branches around the central enamel plaque. 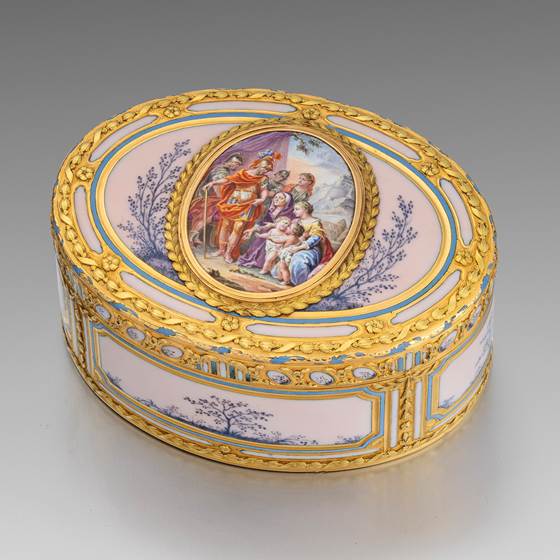