Today marks the start of The Great Fire of London in 1666.

The horrific events sparked just after midnight on 2nd September. The blaze lasted four days and spread across central London from Pudding Lane. The fire is believed to have started at the bakery of Thomas Farriner. Approximately 80,000 people were affected. 13,200 houses destroyed and 87 parish churches including the most iconic, St Paul’s Cathedral. It is not known precisely how many people lost their lives during the blaze, but it is estimated many more than was previously believed. Working class people would not have been recorded and the fire would have made it difficult to identify bodies. 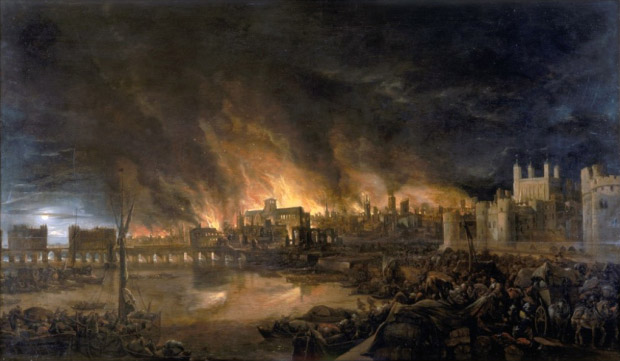 The Great Fire of London by an unknown painter, depicting the fire as it would have appeared on the evening of Tuesday, 4 September 1666 from a boat in the vicinity of Tower Wharf

At The Museum of London, pieces of pottery found during archeaological digs on Pudding Lane suggest that the fire would have reached 1250 degrees Celsius in temperature. London was crammed and buildings were very close together this meant that the fire spread quickly. Lord Mayor London, Sir Thomas Bloodworth was slow to order fire breaks meaning the fire continued to spread. Eventually the order was given and fire fighters made firebreaks by demolishing building in the fire’s path.

The Knight of 1666: Edmund Berry Godfrey

There were many heroes of The Great Fire of London including Edmund Berry Godfrey. Godfrey was a merchant who dealt in firewood, timber and coal. He was also Justice of the Peace for Westminster. Godfrey played an active role in tackling problems that arose from both the plague and the Great Fire of London. In September 1666 Charles II presented Godfrey with a knighthood and a gift of 800 ounces of white plate which was authorised to be handed to him by the Jewel House in October 1666.

Between 1673 and 1675 Godfrey commissioned a commemorative flagon and six tankards to be made as gifts to give to friends in order to commemorate his activities.  All tankards are marked 1675 except for one which is 1673. The flagon and one of the tankards were sold to a private collection by Koopman Rare Art. They were featured in Koopman’s 2008 catalogue ‘Triumphs of the Silversmith’s Art’. Below is an image of one of the other identical tankards commissioned by Godfrey now on display at the MET. 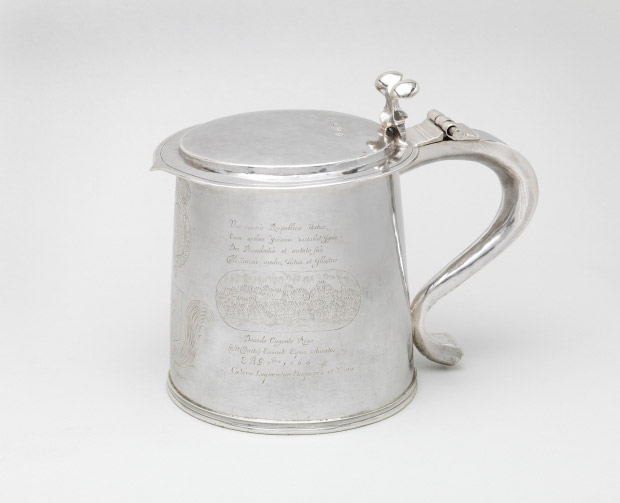 Inscribed on one side ‘The gift of Sir Edmund Berry Godfrey, an active and upright magistrate who, after having rendered invaluable service in checking the progress of the plague, received from King Charles II with the consent of his Privy Council, a silver wine container to perpetuate the memory of his patriotic efforts’

And on the other,

‘A man truly born for his country. When a terrible fire devastated the city, by the Providence of God and his own merit he moved in safety through the flames. Afterwards, at the express desire of the King (but deservedly so), Edmund Berry Godfrey was created a Knight in September 1666. For the rest, let public report speak’

Unfortunately, in 1678 Godfrey was murdered on Primrose Hill, London. He is believed to have been killed by Roman Catholics in revenge for him having been the magistrate to whom Titus Oates gave his deposition revealing the details of the ‘Popish Plot’ to overthrow Charles II and the government to re-establish Catholic rule in England.

Koopman Rare Art sold both the flagon and one of the tankards to private collections. One of the other tankards is on loan to the V & A museum. One is exhibited at the Museum of London and the MET Museum.