It is the season for art in October in this part of the world and collectors were keen to aquire the best treasures. This superb Chinese punch bowl is the best example we have ever seen come to the market in terms of its size, quality and design. Referred to as the 'Chin Chin Plate' is was created for the annual Amoy horse races or Xiamen as it is known as today. 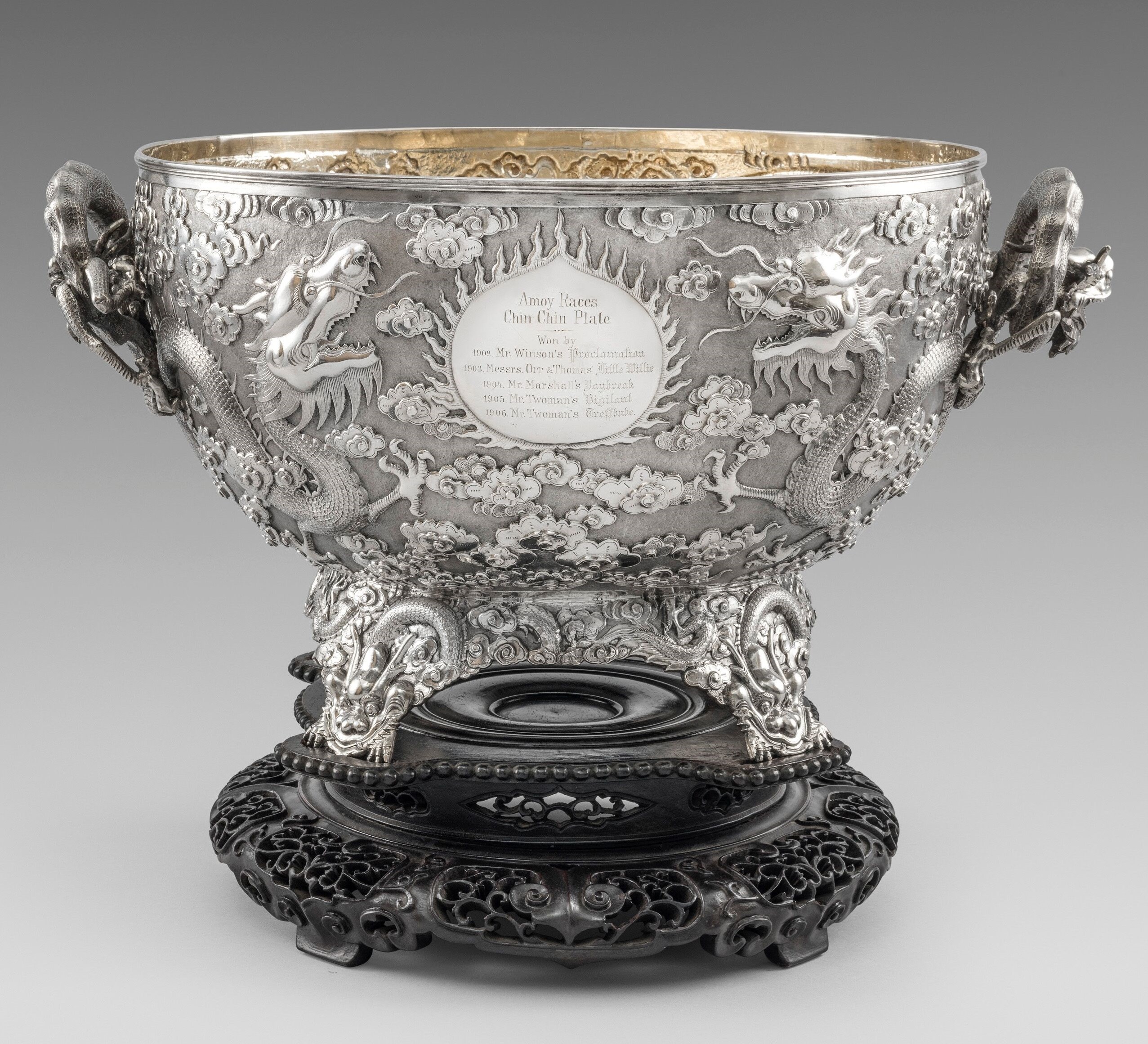 Inscription referring to the Amoy Races, the modern city of Xiamen
Hung Chong & Co was a retail silversmith with its own manufactory or workshop and was owned by Fok Ying Chew. The retail store opened in 1892 after the manufactory began.

The following article appeared in a 1908 published travel journal of an Englishman and repeated verbatim: “The Chinese are admittedly clever craftsmen and the silver-ware which they manufacture is very popular with collectors of Eastern curios and souvenirs by reason of its quaint beauty. Among the leading gold and silversmiths in Shanghai are Messrs. Hung Chong & Co., who deal largely also in blackwood furniture, embroideries, silk piece goods etc. Their premises at 11b Nanking Road always present a very attractive appearance. The business was established in 1892 by Mr Fok Ying Chew, who sold it in 1906 to the present proprietor, Mr Sum Luen-sing. The large trade carried ion necessitates the employment of fourteen assistants and forty-workmen. Mr Sum Luen-sing is the son of Mr Sum Cheuk Sing and was born in Macao in 1871. He studied English in Shanghai and at the age of sixteen joined the “Limpu” Line of steamers. After remaining in this employment for three years, he obtained a post with the “Kang-yue” Line. He joined Hung Chong & Co. as an assistant in 1892. He is married and has one son and daughter.”
The journal is, I believe, slightly misleading since there is evidence that Hung Chong was manufacturing silver before the Treaty of Nanking in 1842 as several pieces are recorded with the Hung Chong mark in the form of a pseudo-hallmark. If the journal account is true, then it would be reasonable to assume the retail shop opened in 1892, although even this seems late for a business that was so established by 1900.

Hung Chong was obviously a destination in Shanghai if one wanted to make a statement in silver or to acquire something suitable for an occasion that required a measured, but palpable, degree of pomp and circumstance. The following item, a stemmed punch bowl circa 1875 in the grand Chinese style with most of the organ stops activated! It now takes pride of place in the Huntingdon Museum of Art, West Virginia, USA. 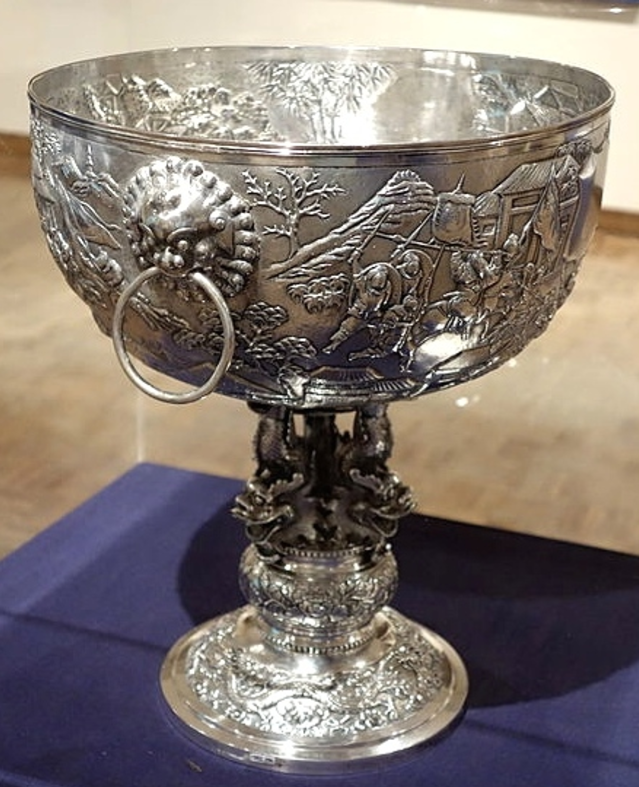 Another fabulous piece of silver from the establishment of Hung Chong. Hung Chong, by default of it being a retail silversmith, was obviously dependent upon artisan silversmiths to create items in the ever-evolving style that Hung Chong became famous for.

Hong Kong is a truly international city and the areas of interest for the collector are just as diverse. The best of the English silversmiths in Paul Storr was of keen interest and this tea urn by the great master was sold during the fair. 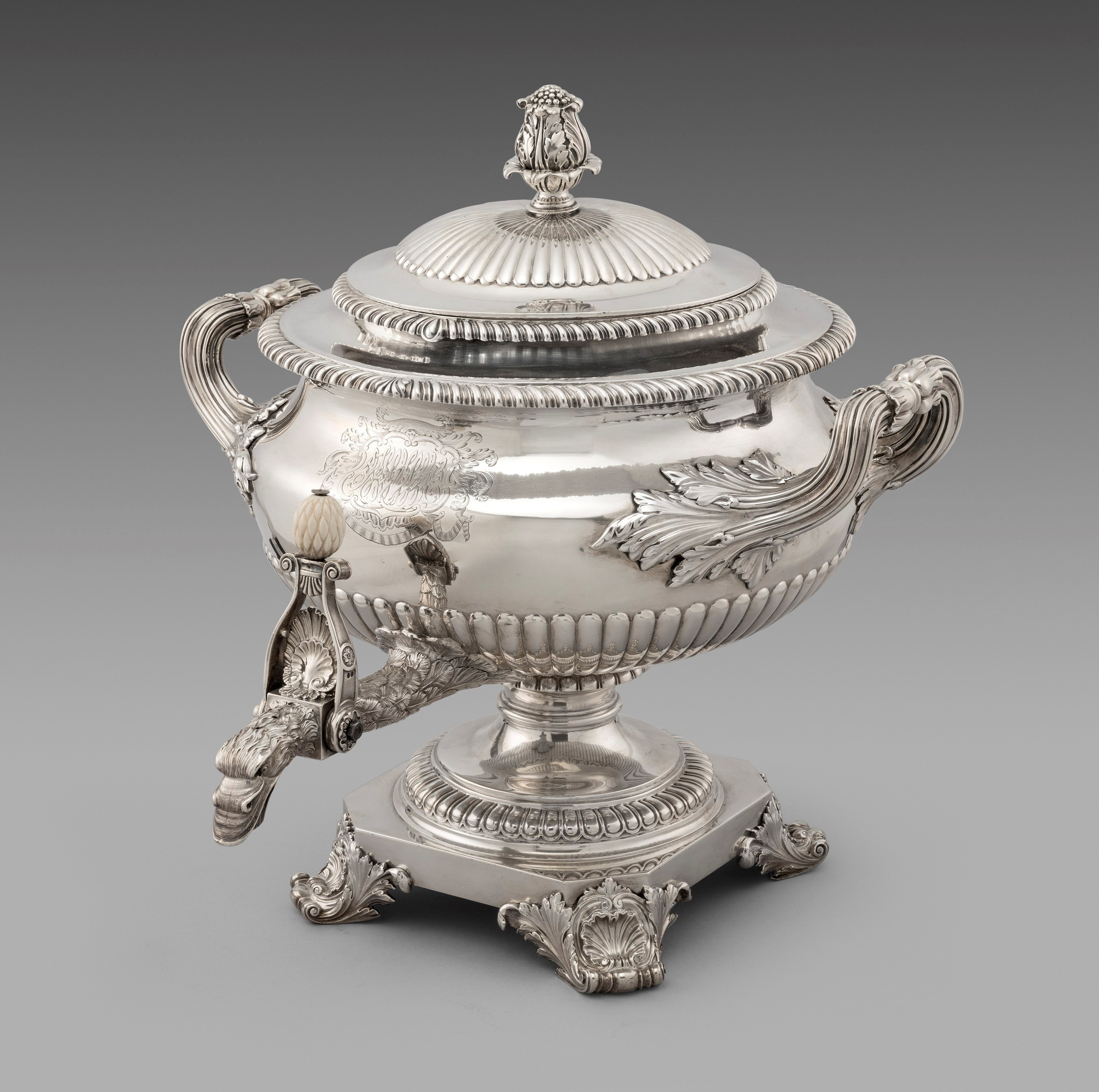 Of compressed circular form, the pull-off cover with part-fluted decoration an leaf and bud finial. The main body with gadrooned borders and cast fluted leaf-capped handles. It is also engraved with a monogram surrounded by mantling and with part-fluted lower section.The cast spout modelled in the form of Apolloneon eagle's-head with a shell thumbpiece, on a pedestal stem, circular foot and canted square base issuing cast acanthus and shell-capped feet.
This suberb piece formed part of the exciting exhibtion we held on Paul Storr silver back in 2015.