The reputation of Paul de Lamerie (1688 – 1751), renown as the greatest silversmith working in England in the eighteenth century, proceeds him, yet, despite his success as a silversmith, it is a rare occasion to have such a large and varied collection of De Lamerie silver, especially from the perceived height of his career in the 1730s.

Far less of De Lamerie’s silver survives today in its original state as much would have been refashioned to suit the emerging Neo-classical tastes that succeeded – it being more cost effective at the time to transform an existing service that had fallen out of fashionable favour, than to commission a new one entirely and in addition to the service one would have already possessed.

It was under the tutelage of the most prestigious Huguenot silversmith, Pierre Platel (circa 1664 - 1719), following a ten year apprenticeship, that Paul de Lamerie was able to establish himself amongst the elite in the new revolutionary sensibility – the Rococo style. Conceived to provoke a romantic sense of confusion and dream-like atmospheres, without renouncing the grandeur, theatrical scale and formal robustness of the Baroque, the rococo style treated natural subjects with a sense of whimsy and asymmetry - emerging in the early 1730s and coming into full fruition in the middle of the decade.

The success that De Lamerie achieved as a silversmith is the result not only of his innovation of decorative techniques but also in his trade choices as a successful Georgian business owner. His skill was quickly recognized and by 1717 he was referred to as ‘the King’s Silversmith’, only four years after entering his first mark into the Goldsmith’s Hall, in 1713. 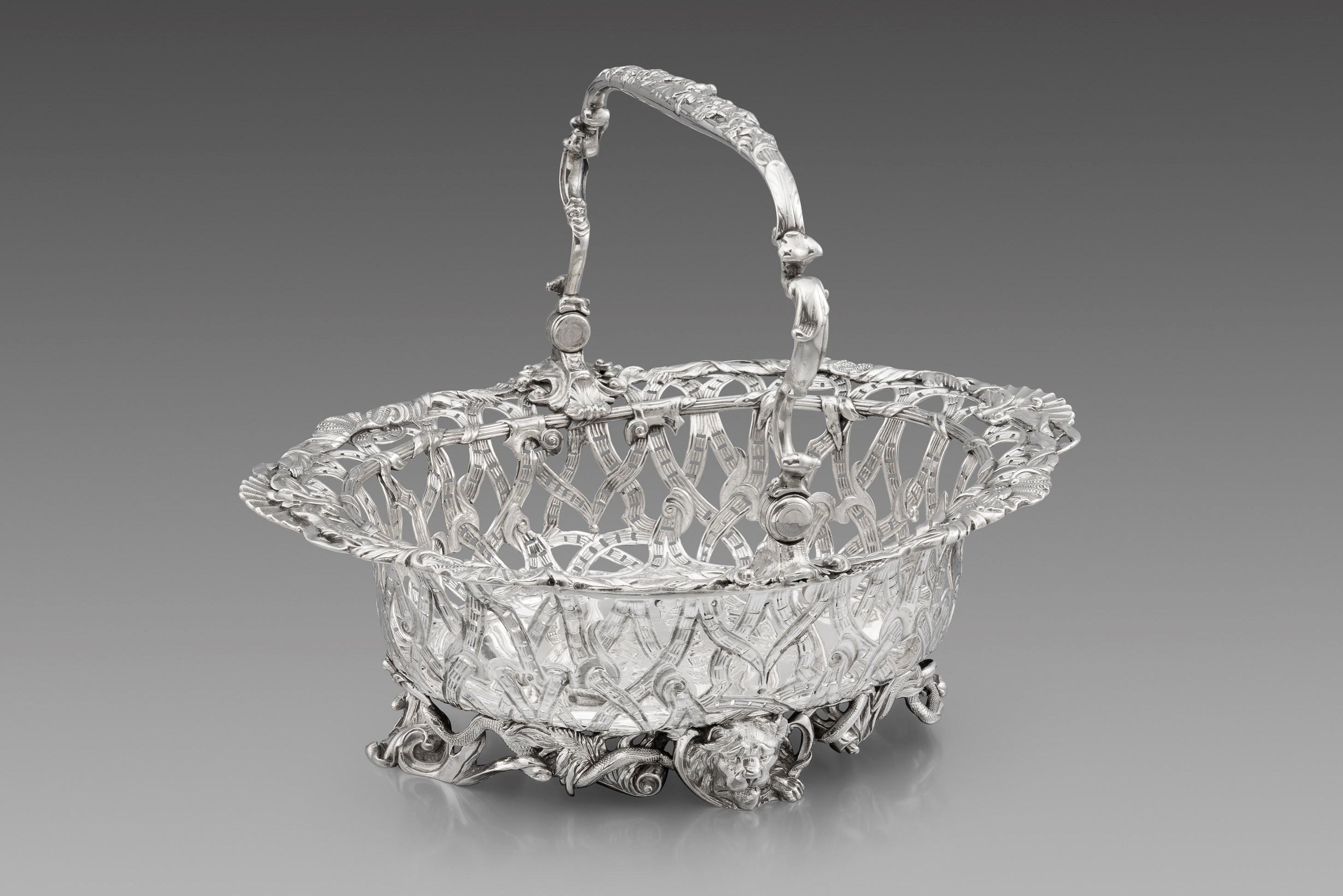 This elaborate George II silver basket by De Lamerie, 1738 exemplifies his established transition from his earlier productions, that possessed a more sober and solid tendency to the Queen Anne style, into a rococo shaping of Huguenot art with delicate strapwork and cast and applied decoration. The foot rim is cast with finely sculptured lion masks, serpents, and corn ears; the side pierced in a raffia form; and the border case ornamented with shells and wheatears entwined with foliate shapes. Its swing handle is equally as ornate, adorned with cascading and trailing flowers. 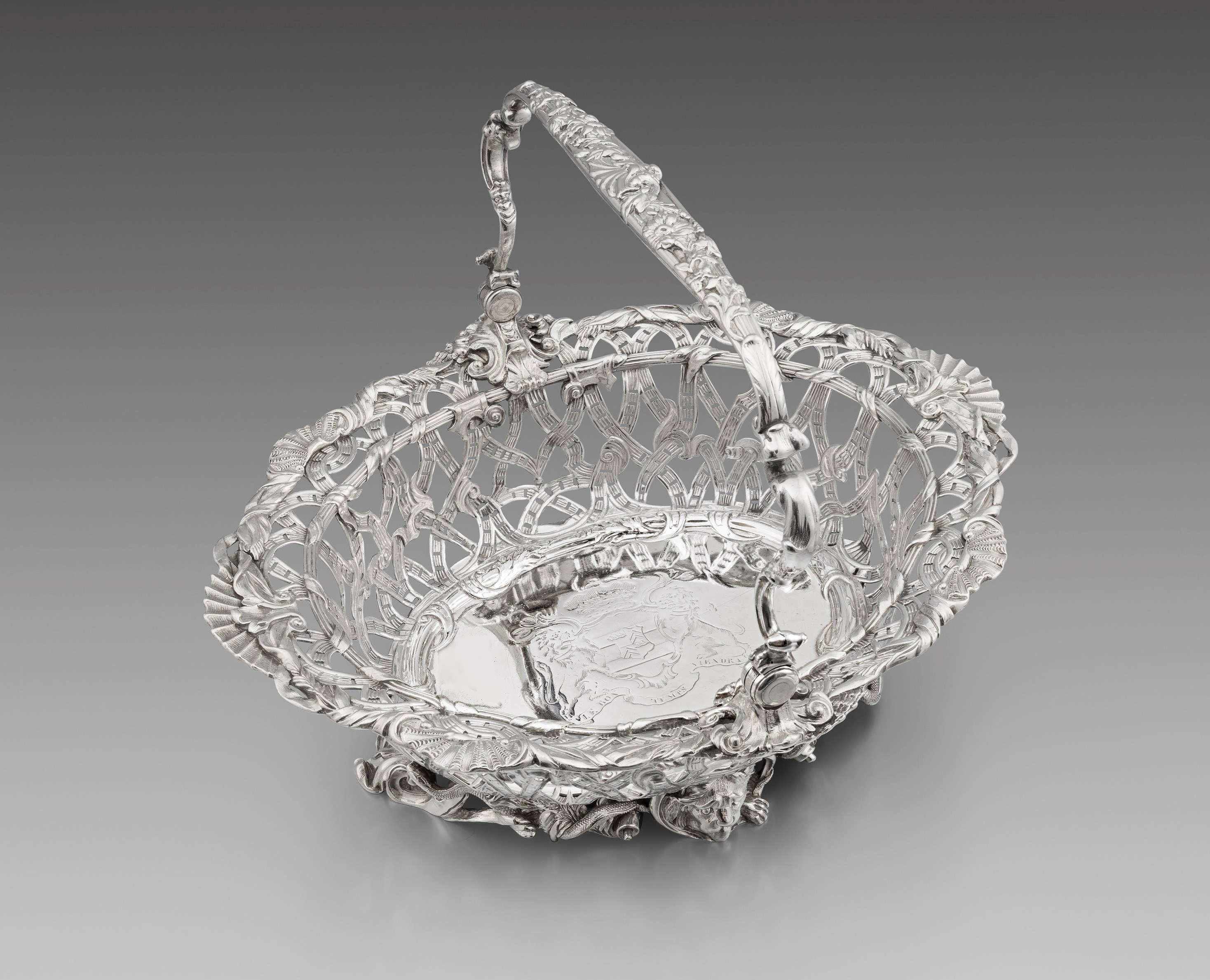 Paul de Lamerie, George II Basket, London 1738
Detail of arms to the base

Among the upper echelons of English society in the first half of the eighteenth century, there was considerable social mobility, and an ambitious professional could more easily amass both capital and influence. The possession of a handsome display of silver was one of the first expressions of upward mobility and this is reflected in De Lamerie’s clientele. Paul de Lamerie was host to several wealthy and politically important patrons throughout his career, most notably, Sir Robert Walpole (1676 - 1745), Britain’s first prime minister, who guided the Whig supremacy under George I and George II.

This basket here presented bears the arms of Simon Harcourt, 1st Earl of Harcourt of Stanton Harcourt, from the period in which he held the title of Viscount. Sir Simon Harcourt was an ambitious man and was bestowed with the honour of Lord Lieutenant and Viceroy of Ireland in 1772. He was an enthusiastic patron of the arts, his cultural enthusiasm matched only by his attainments throughout his career in royal service. Thus, Sir Simon Harcourt would have surely recognised the fine quality of this elaborately decorated silver basket. Richard Pococke described Sir Simon Harcourt as a ‘most amiable serious fine gentleman of good nature and good sense.’ 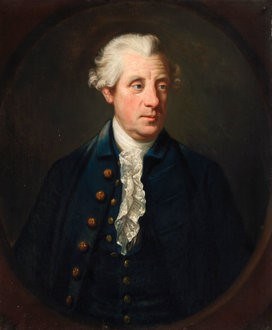 While a basket of this high quality and design by De Lamerie is a rare find, a greater number of cups has survived by contrast. In the eighteenth century, the two-handled cup developed into more of a ceremonial object than a functional one. It is surely this pronounced heirloom status that has ensured the longevity of this present example of a De Lamerie Cup & Cover. Elaborate cast mouldings again reveal the contemporary tendency towards the more ornate Rococo style which had become extremely popular in London from the mid-1730s. 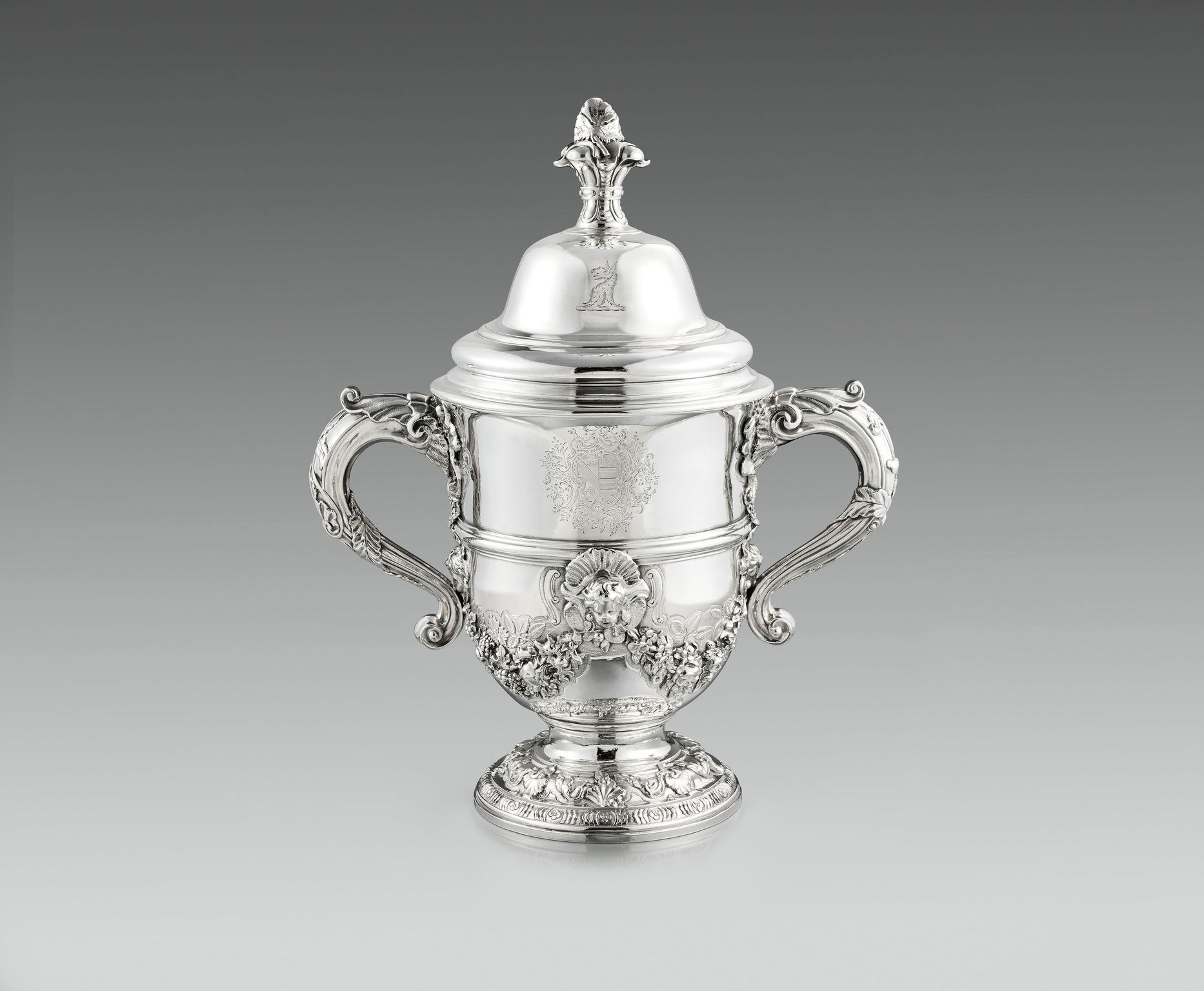 Of inverted bell shape with a stepped foot and two handles, the shape of this cup and & cover is quite typical of cups made between the 1720s and 1780s, however, the true innovation lies in de Lamerie’s mastery of applied decoration and design. To the foot, above a rim of floral motifs, is a band of applied and chased leaves and shells so seamlessly designed it were as if together they formed a flowing foliate ribbon. To the main body of the cup, festoons of applied fruit and flowers hang from putti masks against a background of chased and engraved leaves. The reeded scrolling handles, also with applied foliate detail, affix to the main body of the cup with relief chased shells, blending seamlessly into the organic scheme of fantastical ornament. 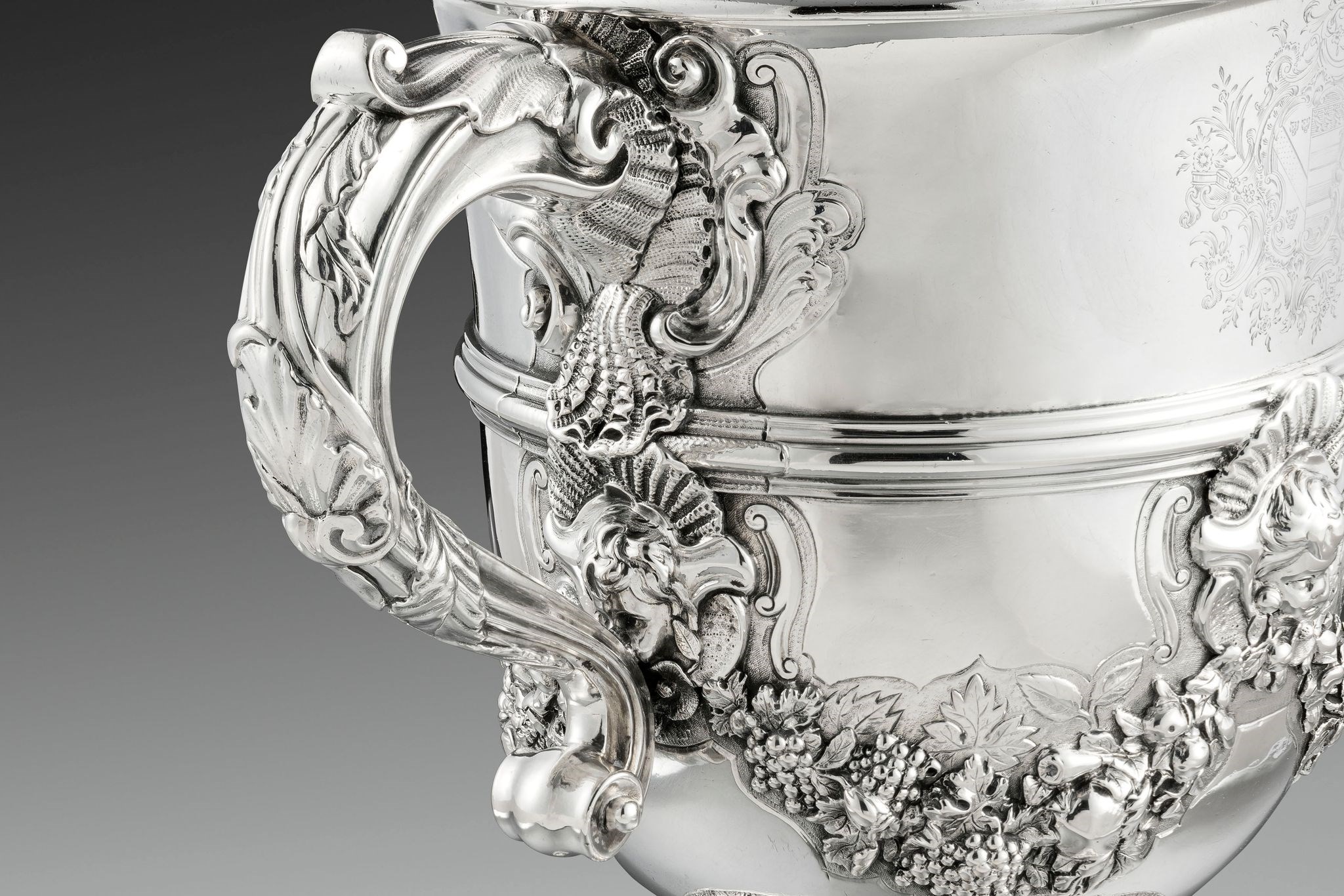 The engraved coat of arms to the front of the cup is that of Sir Timothy Waldo (1704 - 1786), a wealthy lawyer, City merchant, and attorney of the King’s Bench, later knighted in 1769. Such was his success in his career, in 1749, Sir Waldo purchased the thirteenth century Hever Castle, the once childhood home of Anne Boleyn. 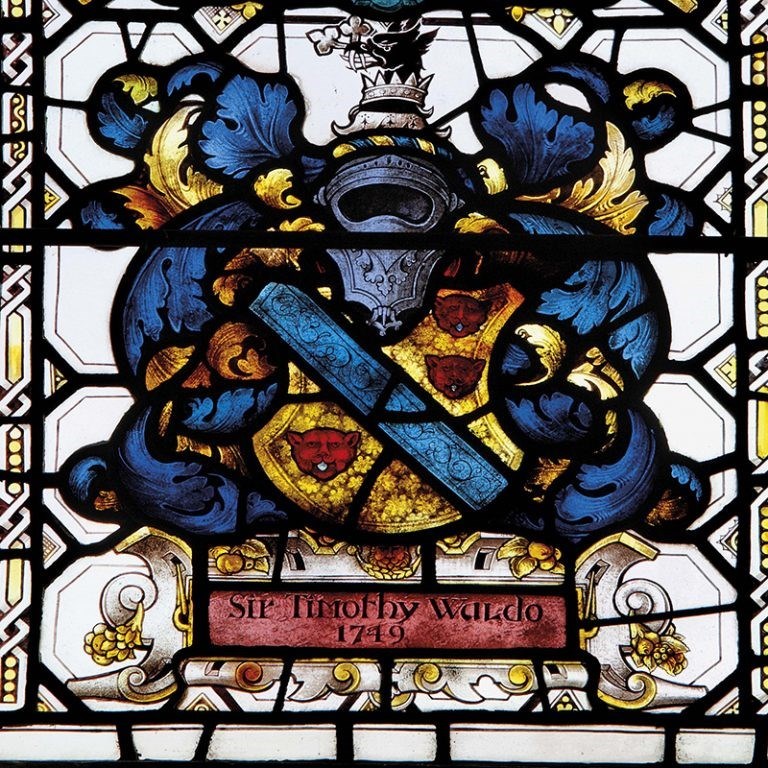 Stained glass window from Hever Castle, bearing the coat-of-arms of Sir Timothy Waldo on his purchase of the property in 1749.


Aside from the widespread recognition and commercial success that Paul de Lamerie experienced throughout his lifetime, his reputation was continuously acknowledged after his death in 1751. De Lamerie’s keen business sense and management of the gifted specialists who worked with him have surely affirmed his role in the supply of some of the most ambitious and innovative silver of the period, greatly sparking both antiquarian and collector interest.

As London’s pre-eminent dealers of the finest antique silver, Koopman Rare Art has had the privilege of dealing with a number of magnificent pieces by the celebrated silversmith Paul de Lamerie.

To discover more remarkable De Lamerie treasure, be sure to explore the ‘Notable Sales’ section of our website, where you will find, among other, details of the Magnificent Lequesne Coffee Pot, and a George II Treasury Inkstand that once belonged to Sir Robert Walpole. 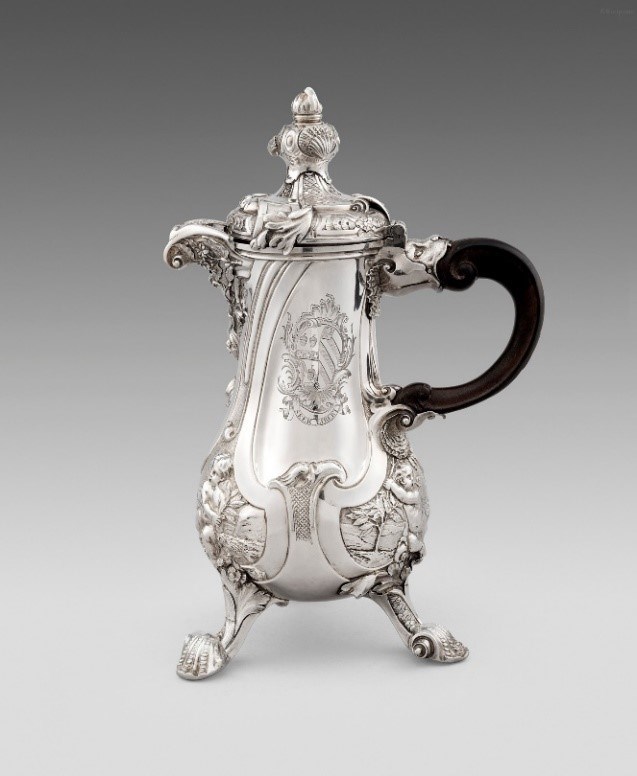 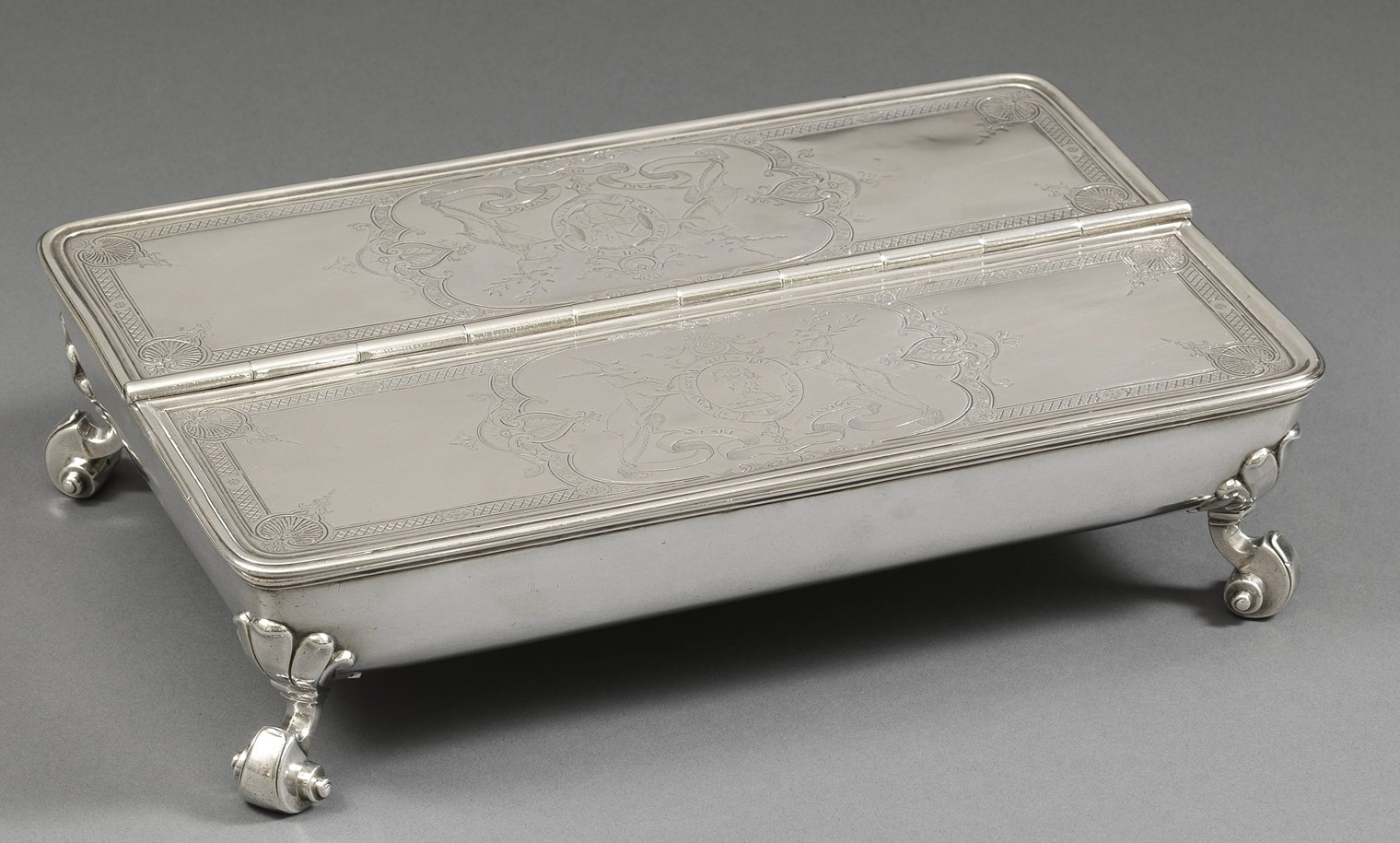