In celebration of The Queen's Platinum Jubilee, we have put together a collection of eight Royal pieces. These Royal pieces are from reigns past of varying lengths, but none with the longevity of the Queen's extraordinary seventy.

Charles became King at the age of thirty. On the King’s return from hiding in Holland, he reinstated the splendour of the nation by adopting the elegant Dutch taste for chrysanthemums, tulips, and festoons of fruit in the ornamentation.

The Dutch style is evident in the Royal wall sconces below. Each of the sconces presents a richly embossed background with lions and putti in relief and is partially applied with winged dragons emerging from masses of scrolling acanthus foliage. Adding to the rich decoration, each plain central panel is framed by palm leaf cartouches and applied above and below with the bust of Susanna, the Hebrew wife from the Book of Daniel. 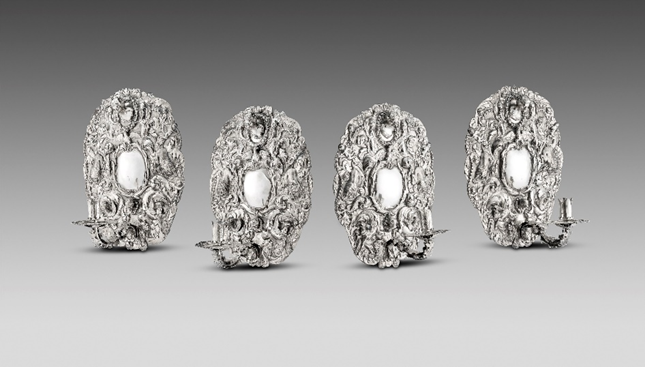 Made in England around 1670

Prior to Charles' coronation, Sir James Mercer was made his Gentleman usher. His only son, Charles, was christened in June 1667 in the presence of his godfather, the King, whose gift of 80 ounces of gilt plate to mark the event is recorded in the Jewel Office warrant books in the National Archives. Writing afterwards to his father-in-law, Mercer recalled that "His Majesty on occasion was very jovial, without any sort of drinking".

The elegant ewer below was part of that royal gift. Silver historian Christopher Hartop has attributed the maker's mark on this ewer to Henry Welch, an immigrant craftsman who worked for the royal household. The mark appears also on a pair of candlesticks in Lambeth Palace Chapel and on another one in the Fogg Art Museum, Harvard University. The cut-card detail on this ewer is incredibly early and display a strong French influence. 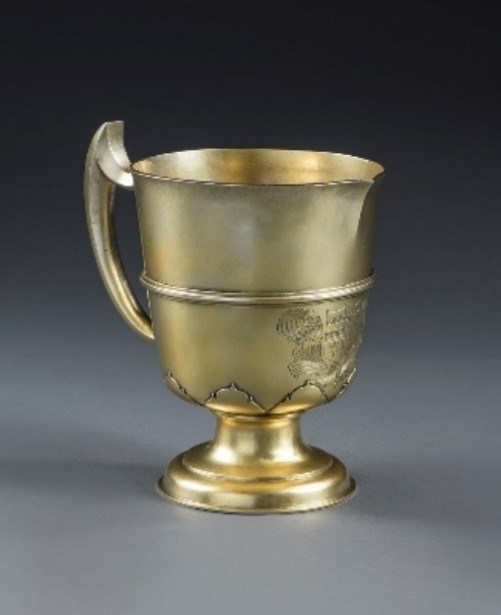 By Henry Welch
Made in London around 1667

Queen Anne was the first sovereign of Great Britain under the Acts of Union 1707, which united the crowns of England and Scotland into one country, creating the United Kingdom as we know it today. She was a great patron of the arts and was keenly interested in music, poetry, and theatre. She remodelled parts of the Royal Chapel and the Queen's Drawing Room of Hampton Court Palace in a grand baroque style.

The campana shaped sconces surmounted with a crown by Anthony Nelme below were made for Queen Anne, but the cypher was changed in circa 1810 for Queen Charlotte. The openwork foliate scroll royal cypher now reads 'CR' - Charlotte Regina, Queen and wife of George III - finished with a scallop shell at the bottom. Anthony Nelme was one of the most prominent silversmiths working in the Queen Anne Style, recognised for the high quality of his technical skill and artistry of design.


A Pair of Royal Wall Sconces 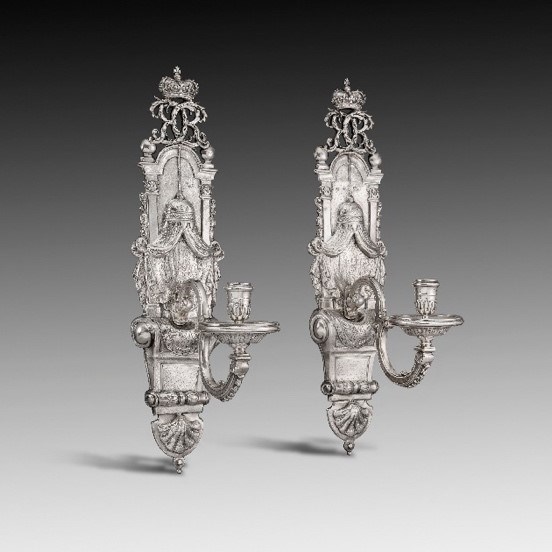 By Anthony Nelme
Made in London in 1713

George II became King at the age of forty-four. During his reign, his popularity fluctuated. Interestingly, George II fought alongside his soldiers at the Battle of Dettingen in 1743 in Germany, which made him the last sovereign on the battlefield.
George II gifted the presentation dish below to Sir William Strickland (circa 1686-1735), 4th Baronet of Boynton, co. York, on the occasion of his son, George's, christening in March 1729.

The dish's centre is finely engraved with the Royal coat-of-arms of George II within a baroque cartouche flanked by supporters and above the motto DIEU ET MON DROIT. This would have been an ordinary gift from a monarch to a member of the Royal Household.

Sir William Strickland succeeded to Baronet and, shortly after, became a Lord of the Treasury and Treasurer of the Queen's Household. A great friend of Sir Robert Walpole, Strickland, was chosen to replace Henry Pelham as Secretary at War in 1730 and was made a Privy Councillor, a position he held until his health forced him to retire in 1735. 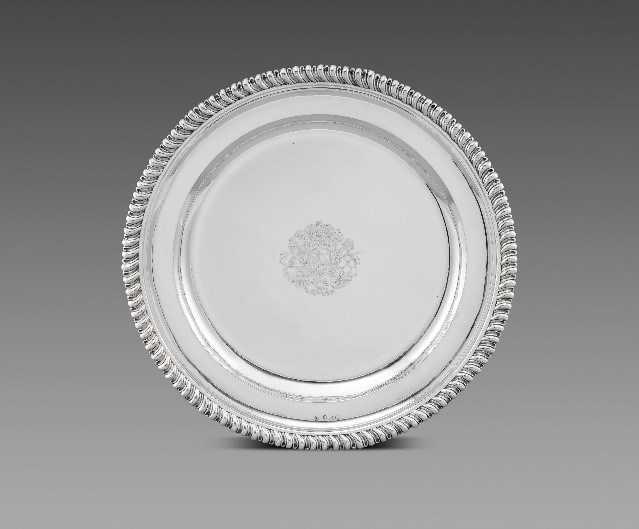 Made in London in 1729
By John Edwards II 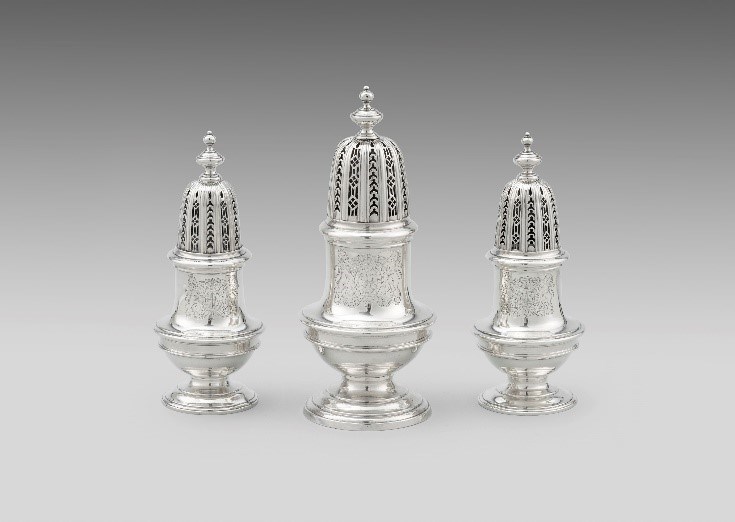 
Another extraordinary example of the George II style is embodied by these baluster-shaped Royal Casters, which feature the King's coat-of-arms. The casters present purity of form, exceptional gauge and quality, and intricate piercing, typical elements of the work of Paul de Lamerie.

George III became King at the age of twenty-two. Historically, this King is known for many reasons, the most important of which – for us - is his role as patron of the arts. In 1768, George founded the Royal Academy of Arts and, in 1760, commissioned the Gold State Coach, which will most likely see throughout the Jubilee.

The four Anthony Nelme Royal wall sconces you see above were first recorded in George III's silver inventory entitled 'A list of His Majesty's Plate in the Jewel Office, 18 February 1812’. Unfortunately, the sconces were among the considerable quantity of plate that the Prince Regent chose not to keep, so they were sold, ostensibly for melting, to Rundell, Bridge & Rundell. Like many other pieces in this group of the royal plate, however, Rundell disposed of them as part of their stock of second-hand and antique silver, a branch of their business which at that time was flourishing.

Featuring the Coats of Arms of King George III is the 1817 Paul Storr seal box below.
Seal boxes like the present one would have contained the wax seal to be affixed to royal documents. The two openings on each side would have presented a cord and a tassel that came out attached to the enclosed royal seal. The seal was held by the Lord Keeper of the Great Seal. At the death of the King, all the silver seals were to be destroyed. The facade of this box, exceptionally modelled by Paul Storr, shows what the seal would have looked like. 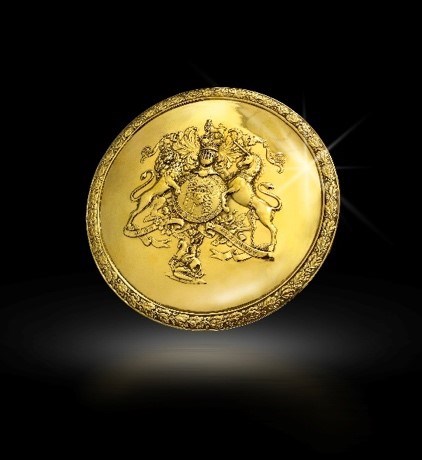 Augusta Sophia was the second oldest daughter of George III and Queen Charlotte and, famously, their favourite child. She never married and had no children.

The Pair of Robert Garrard wine coolers below are engraved with the initials 'AS' for Augusta Sophia, Princess of England, and Ireland, for whom these magnificent wine buckets were commissioned. They are also further engraved to the underside with 'E.A F' standing for Ernest Augustus Feideikommiss. Feideikommiss meaning they formed part of the entailed estate after he succeeded as King of Hanover in 1838. Therefore, this would suggest the wine buckets were either a gift from sister to brother or inherited.

A Pair of Bucket Wine Coolers 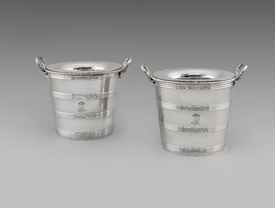 Made in London in 1831
By Robert Garrard

George IV
Reigned for ten years from 1820-1830
George IV became Prince Regent in 1811 because of his father's illness and was well-known for his enthusiasm for the arts. He famously commissioned both artworks, notably Dutch and Flemish ones, and portraits to Sir Thomas Lawrence and Sir Joshua Reynolds, as well as he acquired magnificent objects. Several of these works still sit in the Royal Collection today. He also built The Royal Pavilion in Brighton and spent time transforming Windsor Castle and Buckingham Palace.

The Jewel of the crown at Koopman Rare Art is The Royal George IV Shield of Achilles, acquired by Ernst Augustus, King of Hanover, and younger brother of George IV and Princess Augusta Sophia, which was bears the maker's mark of the Royal Silversmith Philip Rundell and retailed by Rundell, Bridge & Rundell.

Five of the Achillies’ shields were made, the first of which was made in 1821 for The Prince Regent to form the centrepiece for the buffet of plate at his coronation banquet; this shield is still in the Royal Collection. A further example was acquired by Frederick Augustus, Duke of York and is now in the collections of the Huntington Library and Art Gallery, San Marino, California. Two further shields both marked for 1822-23 were sold to Hugh Percy, 3rd Duke of Northumberland in 1822 for £2,100 and to William Lowther, 2nd Earl of Lonsdale in 1823.

Our Royal shield, which is marked for 1823-24, was commissioned for Ernst Augustus, Duke of Cumberland and later King of Hanover. The new Hanoverian monarch acquired massive quantities of plate in 1838, the weight of which amounts to over 180 kilos, including six thirteen-light candelabra and two centrepieces. This great display of plate would have played an important role in the establishment of the new king and the image of splendour that he wished to create for himself.
However, unlike his brother George IV, he did not acquire plate for the specific occasion of his coronation.

A Highly Important Royal Shield for The King of Hanover 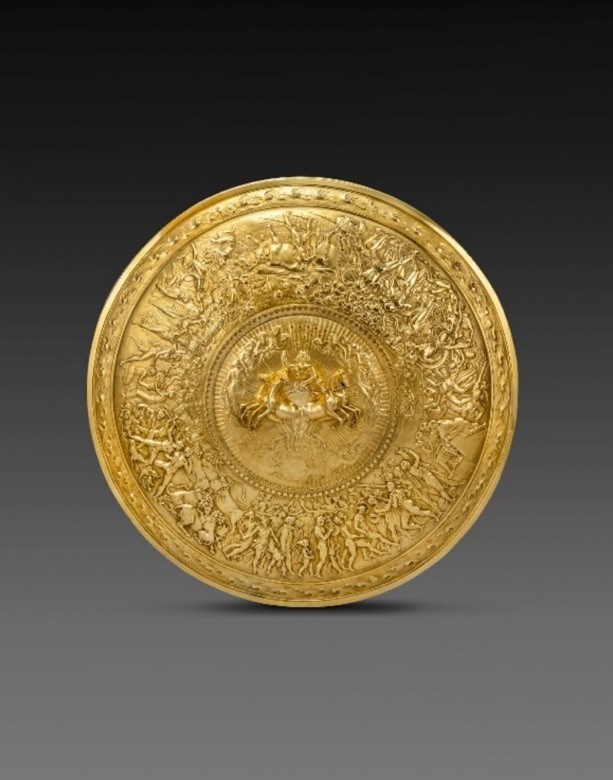 Made in London in 1823
Made by Philip Rundell for Rundell, Bridge & Rundell

We sincerely hope that our selection of illustrious pieces of exceptional quality has fascinated you and perhaps transported you to an era of Royal splendour!