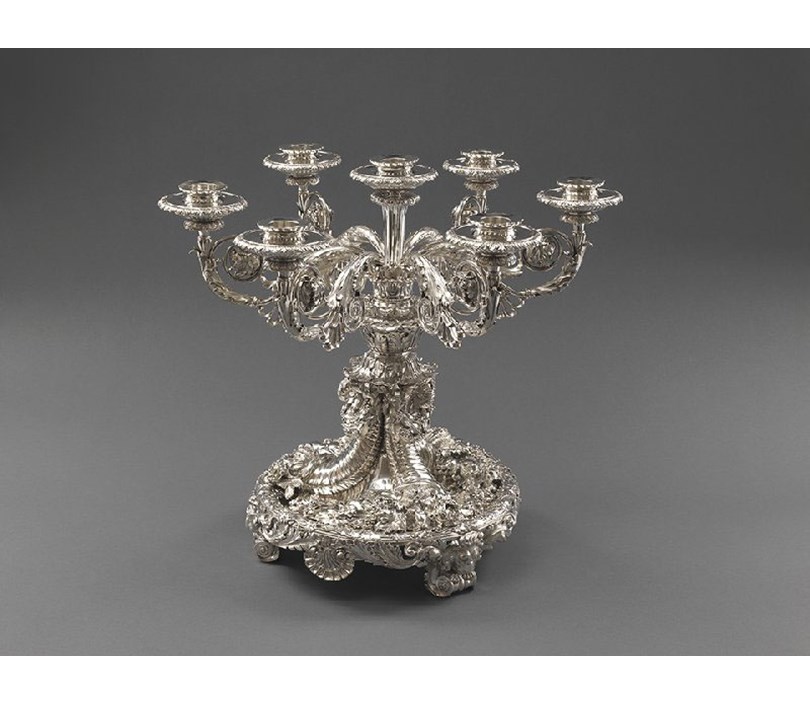 The fabulous ‘Portsmouth’ candelabrum provides a banqueting-table centrepiece and incorporates horns signify ‘wellbeing’ and evoking the history of Jove/ Jupiter as recorded in the Roman ‘Fasti’ of the Augustan poet Ovid. It was manufactured during George IV’s Regency in the ‘antique’ fashion promoted by the court ‘Goldsmith’ Philip Rundell (d.1827) of  Messrs. Rundell, Bridge & Rundell  and would have been invented by their sculptor-designer John Flaxman R.A. (d.1826) and worked up by their Dean Street sculptor-modeller William Theed R.A. (d.1817).
Conceived as a Roman ‘candelabrum’ candlestick, it is environed by three pairs of foliated candlebranches that issue from a triumphal palm-flowered corona or calyx of acanthus foliage. This rises on a tripodic pedestal enwreathed by beribboned laurels, emblematic of lyric poetry, that garland whorled cornucopiae. These inverted goat-horns recall a Golden Age of Peace and Plenty and outpour an abundance of fruit and flowers on a Bacchic tray rimmed by vine-wrapped reeds that are sacred to the Arcadian ruler Pan. This produce of the kindly harvest deities Ceres and Bacchus brings to mind the Roman adage of the poet Terence that, ‘Venus (love) grows cold, without the presence of Bacchus (wine) and Ceres (food)’. So the grapes and pomegranates are accompanied by the rose that has been sacred to Venus since the setting of her foot on land.

The candelabrum’s commission was  an act of ‘Pietas’ that famed the ancient lineage of  John Charles Wallop, 3rd Earl of Portsmouth (d.1853) of Hurstbourne, Hampshire and was made  following the death of his mother Countess  Urania (d.1812), of neighbouring Farleigh House,  and his  marriage in 1814 to Mary Anne Hanson. It can be related to the magnificent entrance-piers of the Hurstbourne estate, designed for the Earl’s father by the Rome-trained court architect James Wyatt (d.1813). Here Coade stone renditions of the Wallop family armorials displayed the ‘Capra’ goat supporters that celebrate their 1743 elevation by George II as Earls of Portsmouth. The Portsmouth goat was intended to recall Ovid’s poetic history of the ancient gods. It was a horn, fallen from the  divine ‘Cretan’ goat Arethusa, that was wrapped in leaves by the naiad Amalthea, before  being filled  with fruit and herbs for the infant Jupiter on Mt. Ida. The candelabrum’s hollowed ‘altar’ pedestal is labelled by the engraved coronet-ensigned crest of the ortsmouths and features the dolphin-tailed nereids/ water-nymphs that attended the triumphal birth of the love-deity Venus.

The candelabrum’s robust form reflects the Grecian architectural taste encouraged by the Society of Dilletanti and  promoted in particular by Joseph Woods’  third and final edition of James Stuart and Nicholas Revett’s richly illustrated, ‘Antiquities of Athens’ (1762-1816) . It was a celebrated light-giving monument, engraved in the first edition, that provided inspiration for the candelabrum’s pillar. This was a small temple-rotunda, popularly associated with the Athenian orator Demosthenes, that had been erected by Lysicrates to hold aloft a sacred tripod. The enflamed and lion-pillared tripod, registering his chorus’ success at an Olympic festival in  honour of Dionysus/Bacchus, was raised on an Ionic capital  that was guarded by Venus’ embowed dolphins. Apart from exchanging horns for dolphins, Flaxman also translated other ornament from the Choragic Monument for the candelabra, where Bacchus’s sacred lions emerge from acanthus foliage to guard the Ionic wave-scrolled volutes forming the feet of its tray. Here too love’s triumphal birth is recorded by Venus’ palm-flowered and shell-scalloped  badges being suspended from its basket-like rim. 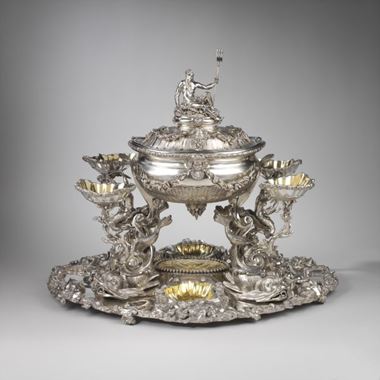 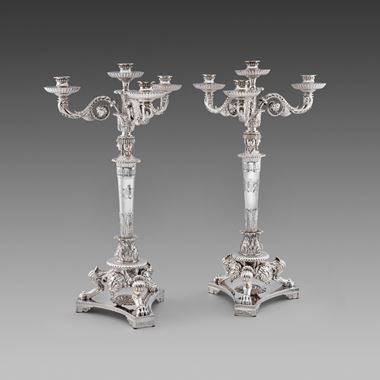 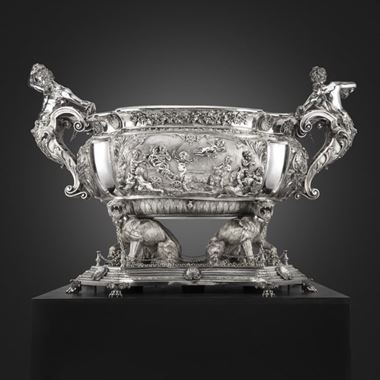