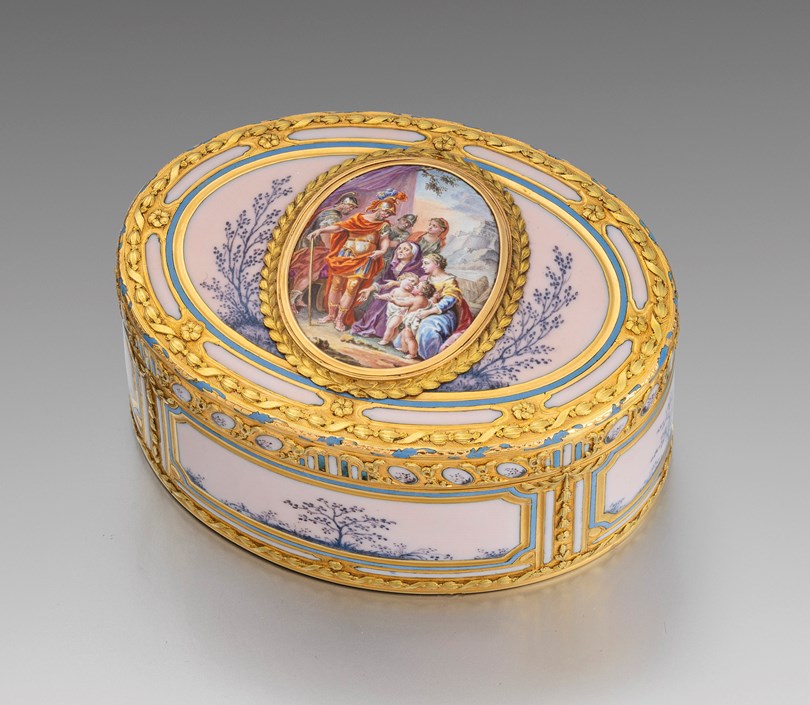 The oval plaque in the centre of the lid represents an event relating to one of the numerous battles fought by Alexander the Great (356 BC-323 BC), king of the ancient Greek kingdom of Macedon. It shows the moment when Alexander visits Darius's imprisoned mother and wife after the battle of Gaugamela in 331 which ended in a defeat for the Persian king Darius.

This snuff box is an exquisite example of a type of decoration resulting from the fusion between two earlier styles. In the 1750s, possibly influenced by the success of the Meissen Porcelain Factory, enamellers started producing a series of boxes with fanciful landscape vignettes in tones of lilac, crimson or puce.

At the same time, some makers began to successfully reproduce the motifs of the hardstone boxes, especially those in dendric agate, whose pattern could sometimes recall a landscape. The crasis of these two stylistic elements leads to the production of gold boxes such as the following, which enjoyed a period of short success around the 1770s.

A box of almost similar design and struck with the Maker's mark EC can be observed in the The Gilbert Collection in London and made in the 1780s.

According to Lorenz Selig, the maker's mark EC crowned can be attributed to Esaias Fernau, the Hanau bijoutier who received his Personalfreiheit ('privilege of freedom') between 1761 and 1764 and had formed a compagnie with Daniel Marchand in 1762. Fernau has recently become known for a number of high-quality enamelled gold boxes, most of which are marked with his initials EF.

According to Selig, 'EC' could stand for Esaias et Compagnie, and it is well known that the Hanau bijoutiers were able to choose their maker's marks and any variations they wished, and often combined or changed them within a few years (Lorenz Selig, Eighteenth century Hanau gold boxes, Silver Society of Canada Journal, 2015, p. 46-47). A similar mark as on the present lot, with slight variations in terms of the crowned letter, imitating Paris date letters, can also be found on two gold boxes in the Metropolitan Museum of Art in New York and the Musée Cognac-Jay in Paris (see Selig, op. cit., p. 46). Moreover, the Musée du Louvre also owns a number of gold boxes decorated with rather sophisticated enamel painting, marked EC below a crown (Serge Grandjean, Les tabatieres du Musée du Louvre, Paris, 1981, nos 547-552), all of which are of similar format, construction and composition to the present lot, the most similar probably being no 553, which is also painted with branches around the central enamel plaque. 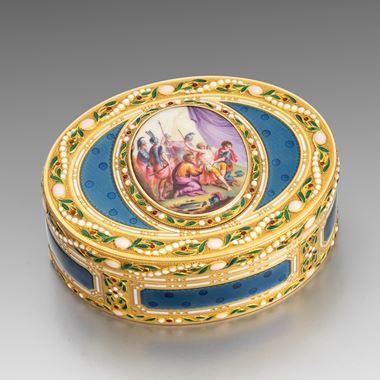 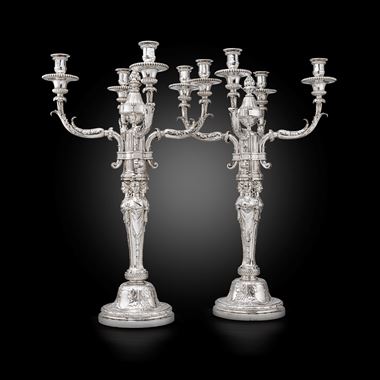 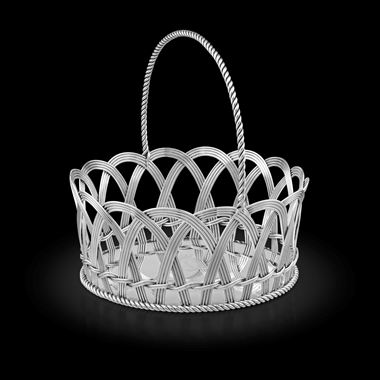 The Earl of Clarendon’s Basket