Thomas Hannam: Son of William Hannam late of Blackford in the County of Somerset tallowchandler deceased, apprenticed to John Cafe 6 November 1754 on payment of 30 guineas. Turned over by consent of John Winning, executor to Mr.Cafe to William Cafe. Free 2 December 1761. Heal records Ebenezer Coker and Thomas Hammond, goldsmiths, Clerkenwell Close, dissolving partnership in 1760, and this appears to agree with the occasional occurence of the mark 3539 in 1759. Hammond & co. also appear in the Wakelin ledgers as supplying waiters. Next occurs Thomas Hannam and Richard Mills, Goldsmiths 1765 (3836). Heal finds Thomas Hannam and John Crouch, goldsmiths, 23 Giltspur Street, 1766-93, and at 37 Monkwell Street, 1790. They appear in the reverse order as plateworkers, 28 Giltspur Street, in the Parl. Report list 1773. In view of the priority given in the above mentions of the partnership it is curious to find the IC over TH mark (1233). The first documented mark is that with John Crouch junior (who had been apprenticed to his father in 1790), 13 April 1799. Address: 37 Monkwell Street. Crouch entered a seperate mark, 11 Februrary 1808, by which time it would seem probable that Hannam had either retired or died. The two partnerships of this firm appear to have had a virtual monopoly in the trade as makers of fine quality salvers and waiters. The earlier marks also appear on cast candlesticks, which in view of Hannam's apprenticeship to the Cafes is not suprising, but this side of their business seems to have died out later. John Crouch: Son of Christopher Crouch late of the Parish of St. Sepulchre in the County of Middlesex yeoman deceased, apprenticed Richard Rugg 8 November 1758. Free, 4 December 1765. Mark, in partnership with Thomas Hannam (q.v.), occurs in the period of the missing register and dates from about 1770. They appear as plateworkers, 28 Giltspur Street, in the Parl. Report list 1773. Heal records them together at 23 Giltspur Street, 1766-93; and at 37 Monkwell Street, 1790; while Crouch appears as alone as a goldsmith, Giltspur Street, 1774-84. Specialist makers of salvers and trays with some candlesticks, but virtually no other type of piece. 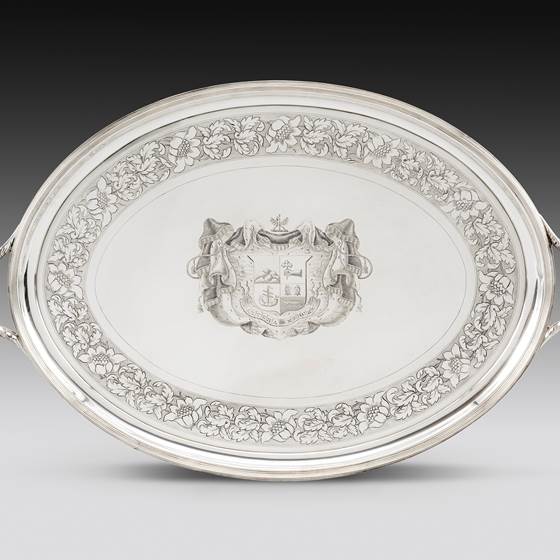