Of the firm Robert Hennell & Sons: Robert Hennell (III) is described in the 1851 census return for 14 Northumberland Street at the age of 56 as a silversmith employing 9 men, together with his wife Jane, aged 47, his daughter aged 26, and his sons, Robert (IV), aged 24, a silver chaser, James Barclay, aged 23, a silver plate worker, Charles E., aged 6, a scholar at home, and Percy, aged 4. J.B. Hennell is further described as a silversmith at the same address in a Sun Insurance policy of 6th January 1855. Following the death in 1868 of R. Hennell (III) the firm was continued in the same style at the same address by R. Hennell (IV). Following the retirement of R. Hennell (IV) on 31st March 1877, R. Hennell & Sons was continued at the same address by J.B. Hennell until his own retirement in 1887 when the firm was sold to Holland, Aldwinckle & Slater. Realistically modelled as a wolf hound this extremely rare form of stirrup cup is of exceptional gauge and quality. He is famous for his novelty items that he produced in the third quarter of the 19th century. Amongst the many different models of stirrup cups, he is also produced an amusing table lighter modelled as a gorilla with a gun, cruets in the form of a kitten, bear and dog in a basket and piglets at their trough. He also produced amusements of political satire such as his Disraeli mustard pot in the form of Disraeli standing over a pyramid. He also produced silver items relating to Punch and Judy. 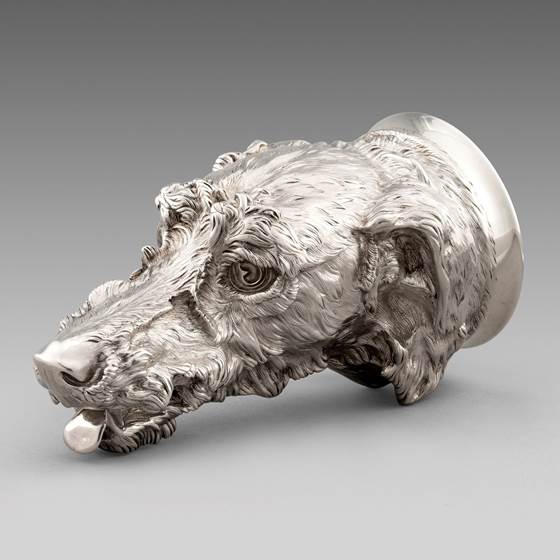