The House of Odiot was founded in 1690 by Jean-Baptiste Gaspard Odiot. The House rose to prominence under the extremely talented Jean-Baptiste Claude, Jean Baptiste Gaspard’s grandson. He received many prestigious orders from the Emperor, including Napoleon’s coronation sword and scepter and the Emperor’s campaign dinner service. Odiot was particularly influenced by the antique style and created lavish displays in silver-gilt. Odiot’s reputation spread beyond the Empire to all the courts of Europe. Charles Nicolas Odiot experimented with electroplating, a new technique he brought back from England in 1824. He worked in the revived rocaille style and by 1825 he was purveyor of silverware by appointment to His Majesty the King Louis-Philippe and to the Royal Family of Orleans. Charles Nicolas was succeeded by his son Gustave who revived the largest order placed with the House of Odiot, 3,000 pieces of solid gold flatware from Saïd Pacha, the Viceroy of Egypt. Gustave went on to become the purveyor by appointment to the court of His Majesty the Tsar. The House of Odiot still functions today. Their exceptionally rich heritage has enabled the House to continue to produce the highest quality of objects. The preservation of knowledge through the ages and their extensive archives make them unique in their production. An unparalleled collection of patterns, moulds and drawings has enabled the House to produce modern day silverware from the original historic moulds and also develop new designs drawing inspiration from the archives. Jean Baptiste Claude Odiot was born in 1763 and becoming a master in 1785, Odiot succeeded his father in the business, steadily building the firm's reputation, coming to a particular notice following the Exposition de l'industrie held in Paris in 1802. Following the bankruptcy, in 1809, of the celebrated neoclassical silversmith Henry Auguste, who at the time was the silversmith to Emperor Napoleon, Odiot was able to purcahse many of his models and designs. Odiot, along with Martin-Guillaume Biennais, soon replaced Auguste as the Napoleon's silversmiths ensuring the success of both firms. Soon Odiot was receiving orders from the French court, including a service made for Napoleon's mother, styled 'Madame Mere'. and as well as from all over Europe and beyond. The Russian's Imperial court's love affair with french silver, most famously realised in the service made for Catherine the great from the Parisian silversmith Jacques Roettiers and his son Jacques-Nicolas Roettiers in 1770 and subsequently presented to her lover Count gregory Orloff continued with commissions from the Russian court to Odiot. Among these important commissions were a massive service for Countess Branicki and Count nikolai Demidoff. Odiot's work during this period is characterised by strong neoclassical forms, ornamented with cast figural elements, attached not by the traditional soldering but with the use of bolts and rivets, a method he inherited from his collaboration with the bronzier Pierre-Philippe Thomire (1751-1843). Having survived the French Empire as well as the Bourbon monarchy, Jean-Baptiste-Claude Odiot retired in 1823 passing the business to his son Charles-Nicolas. 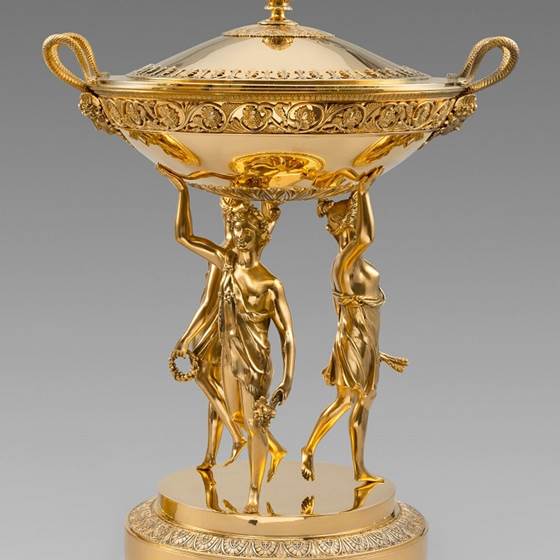