Here at Koopman Rare Art, we are fortunate enough to be constantly surrounded by some of the most beautiful objects in the world. Seeing how excited we all are at such treasures, adds to our joy of temporary ownership.

From the smallest Queen Anne taperstick to the largest Regency mirror plateau, all our pieces have been carefully handpicked as the most representative examples of taste and elegance throughout the different periods and styles.

Sometimes, though, we are particularly proud to be able to present to our public some truly spectacular pieces, iconic silver items made by exceptional makers for exceptional patrons.

Among these, a very special place is held by The Shield of Achilles, made in 1823 to mark the occasion of the Royal Coronation of King George IV, a piece conceived by the most important artists and intellectuals of the time who worked relentlessly to produce the finest and most spectacular object ever made. 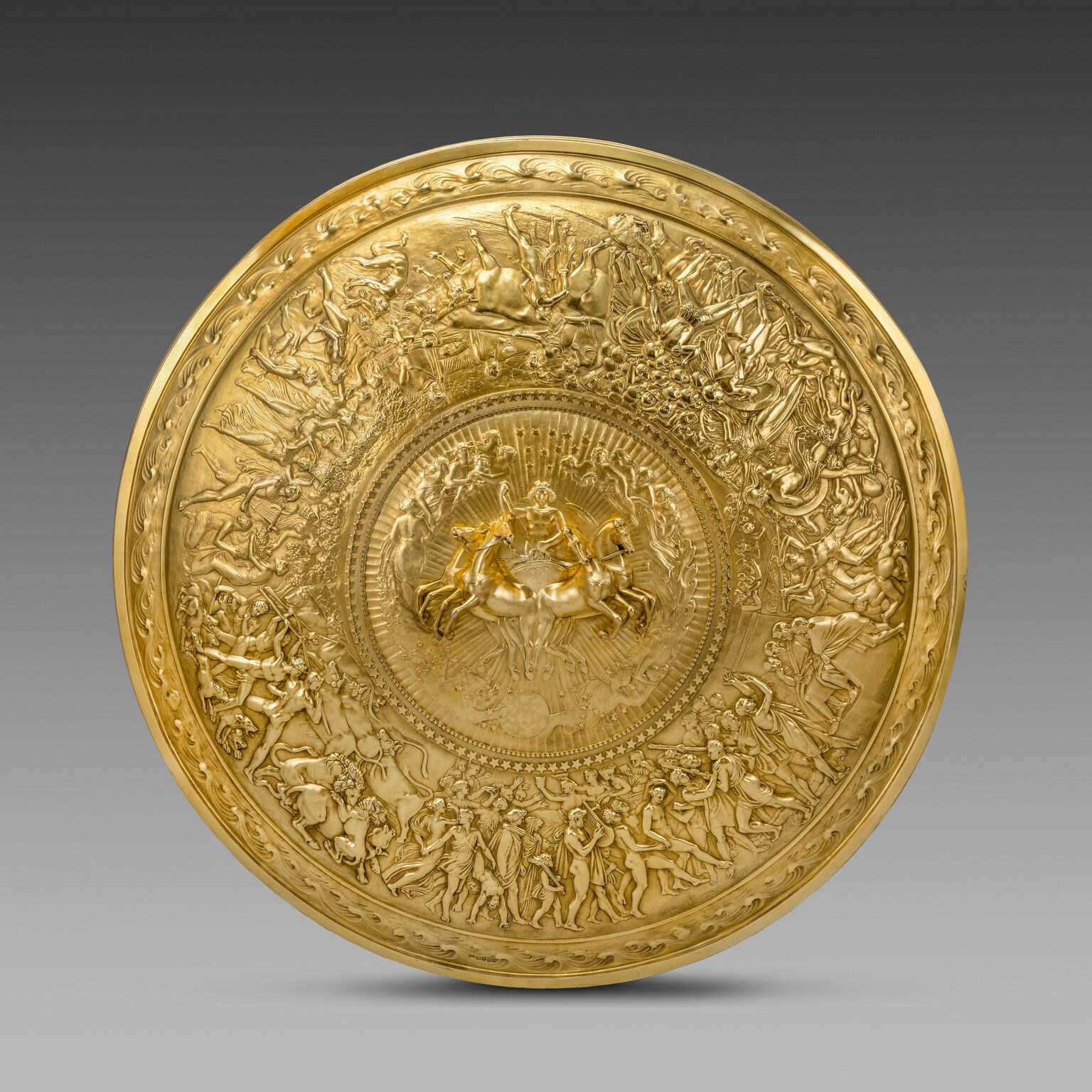 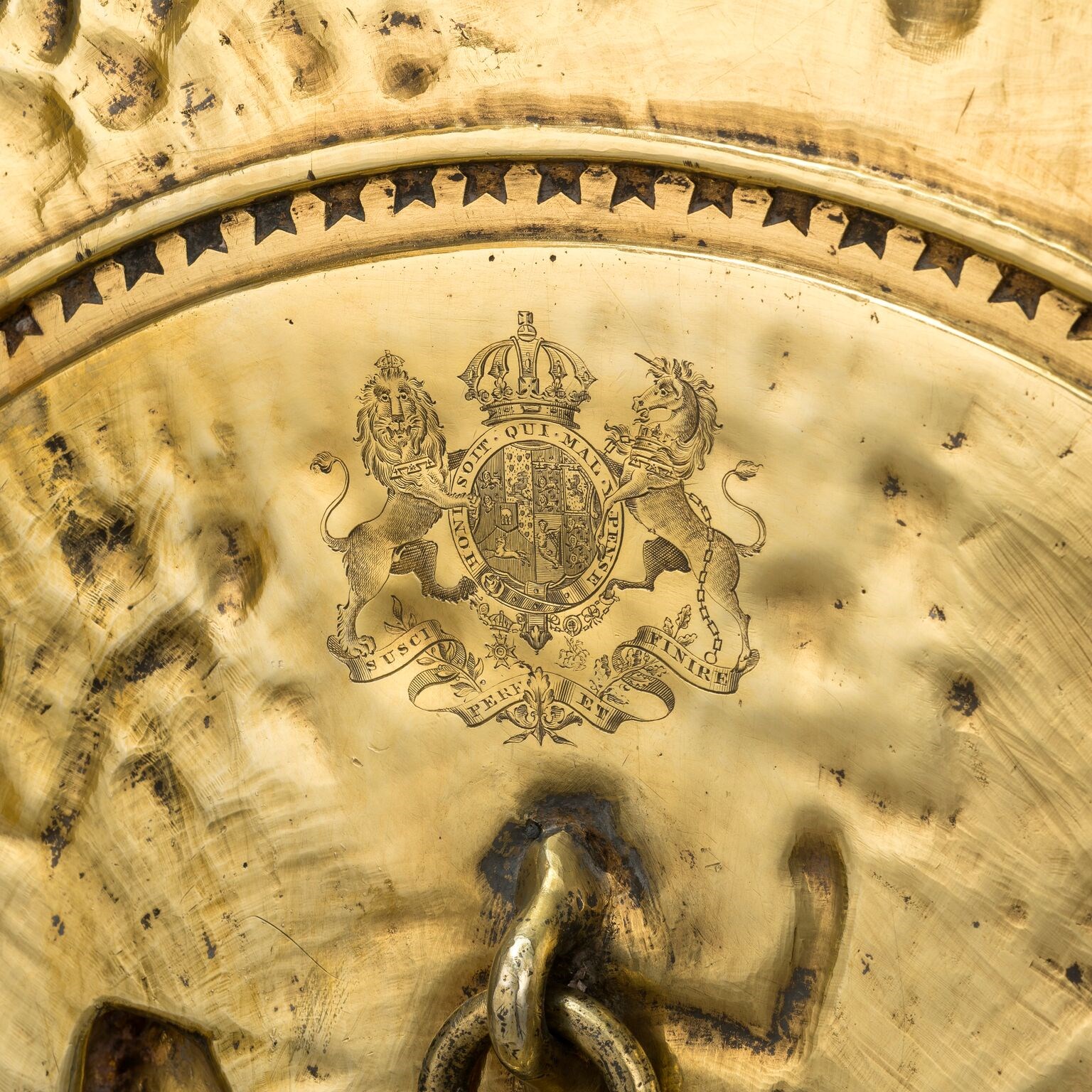 The research on its history has been a particularly exciting journey to me as my personal connection to the Shield and its mythology goes back a long way.

Growing up in Italy, amongst the mystery and beauty of the classical ruins that Rome is so full of, I started studying the Iliad at a very young age in primary school. In Italy, classical poems and culture are regarded as fundamental to modern society and as we live in its legacy, we are naturally inclined to learn about it.

My personal fascination for the Shield also goes back to when I had the privilege to be involved in a large cataloguing project at the Victoria and Albert Museum in London.

Working together with the Decorative Arts Historian, Michael Snodin, we examined and studied several hundred designs on paper for silver objects, mainly from the Regency period.

A large group of drawings came from the workshops that served the biggest royal makers such as Rundell, Bridge and Rundell, and amongst them, several were preparatory sketches for scenes on the Shield of Achilles. Being able to study such an amazing quantity of primary material immediately had a bewitching effect on me and the Shield soon became a quasi-obsession.


The firm of Rundell, Bridge and Rundell reached the peak of its fame when it presented its most famous project: the Achilles’ Shield.

This object exemplifies both the complexity of the very smart business system and what Regency Neoclassicism is all about: creating objects that are even more spectacular than the original antique ones.

The Iliad is an epic poem written around the VIII century BC by the Greek poet Homer, which recounts some of the significant events of the final weeks of the legendary war that happened in Troy (whose original name was Ilium, hence Iliad), that took place around the XII century BC.

One of the main characters, the warrior Achilles, goes to war with a beautiful silver shield made by the Gods and described in the book. 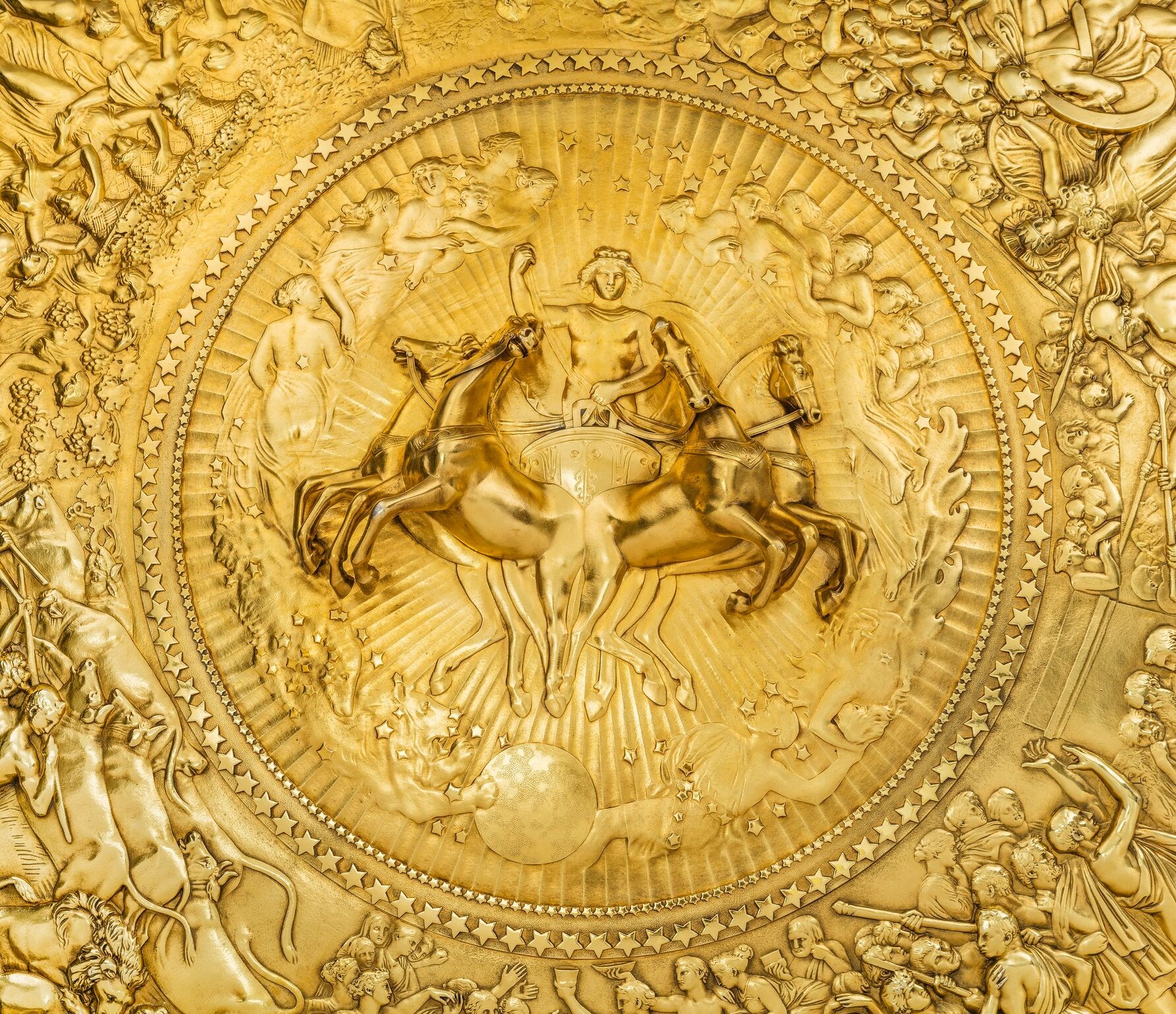 John Flaxman, the designer of the piece, is one of the most important minds behind the development of the Neoclassical style in England. He worked as a sculptor and draughtsman and was employed by the firm Rundell, Bridge and Rundell to design some of their most architectural and elaborate presentation pieces.

Between the years 1804 and 1820, John Flaxman was asked to design the prototype of the famous Achilles’ Shield, conceived as a presentation piece for the newly crowned King George IV. He first conceived the project as early as 1793, when he illustrated the English translation of William Pope but, this time, he understood that it is the glory of the British nation that must  be celebrated by the Shield. George IV himself was keen to be recognised as the embodiment of the prosperous times: a period of military and colonial victories, of science and enlightened industrialisation and of superb cultural refinement and education. 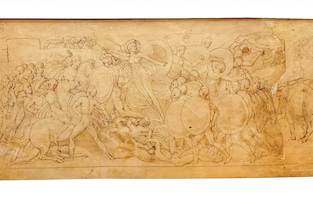 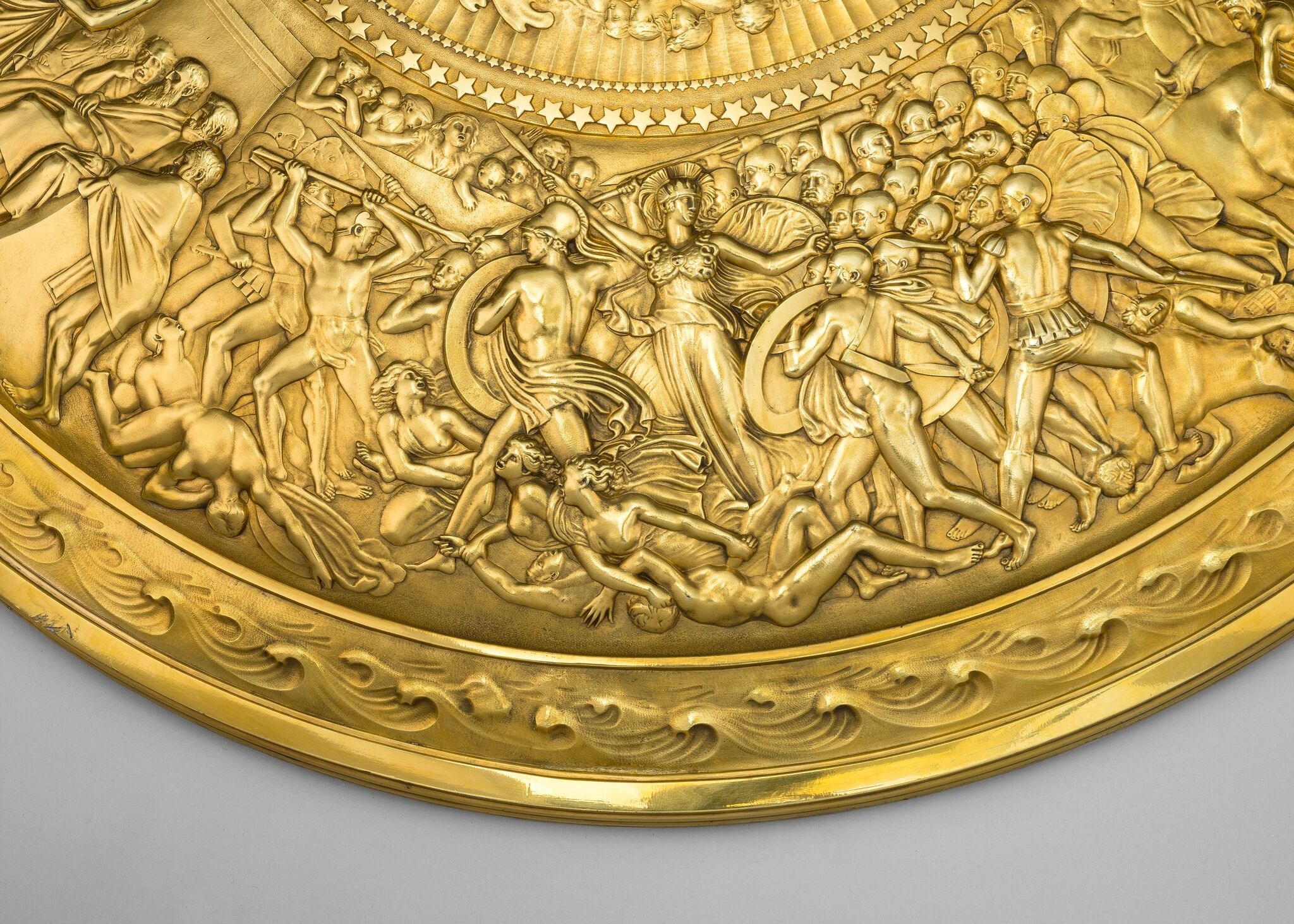 We are all familiar with the main classical epic poems, as they are are nowadays considered part of the literary canon universally recognised as masterpieces; books that helped the development of human thought and built the foundations of civilization. Anyone can recognise themselves in the struggles that Homer’s characters face; human instincts are explored and expressed in a complexity that covers every possible aspect of human life. Love and passion, grief and suffering, anger and hatred, frustration and torment are expressed in such a comprehensive way as to make them part of the cultural patrimony that defines us as human beings. 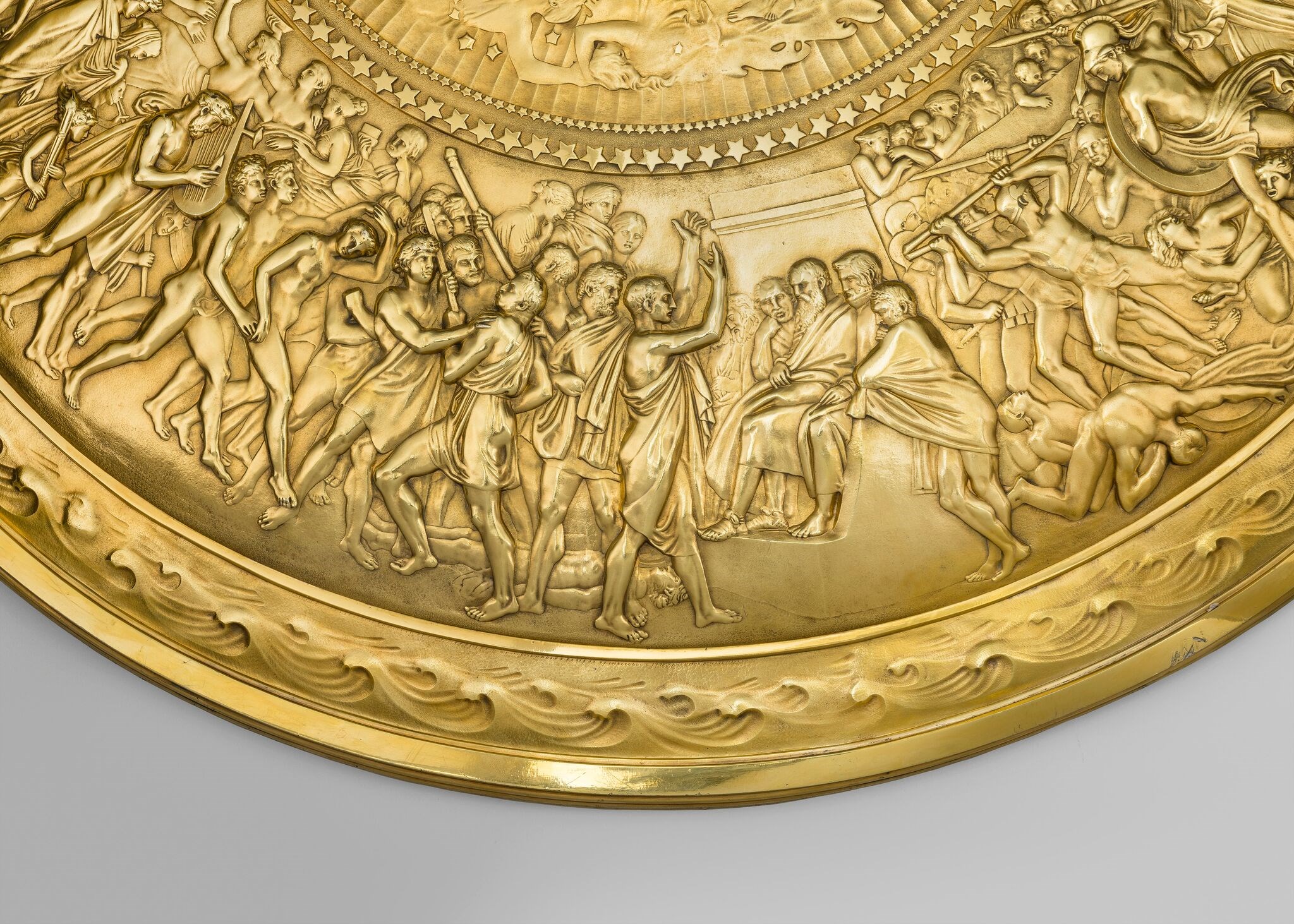 The Shield of Achilles is among the great masterpieces of art history, and not just for its artistic value. It provides material evidence of the historical times both in its theoretical conception and in its physical making. It tells us the story of the relationships between some of the most influential art-makers of the Georgian period, who would shape art history and culture in the years to come.

Read more about the Shield of Achilles in our 2019 Catalogue downloadable from this link and, as always, we would love to read your thoughts and impressions on today’s blog post at info@koopman.art.