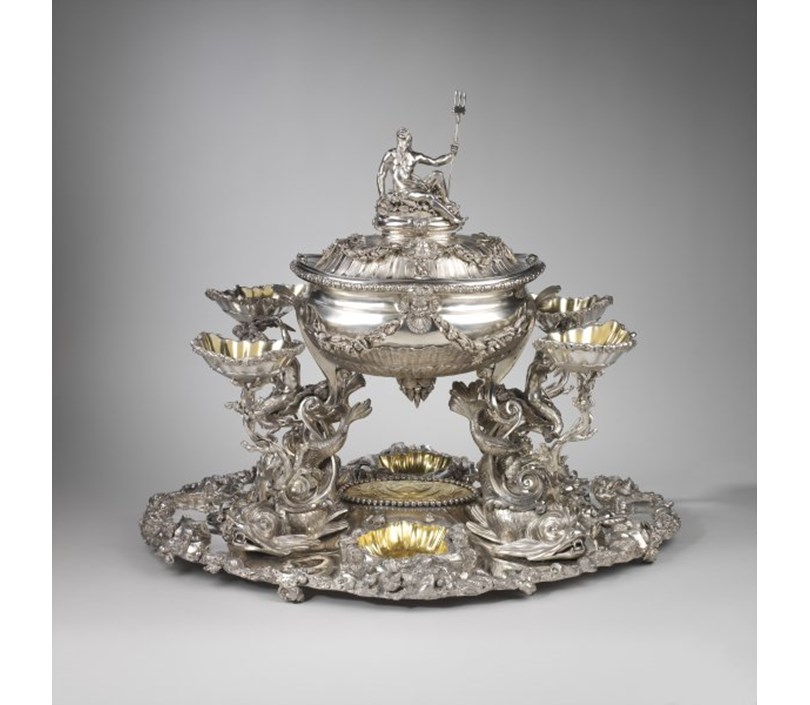 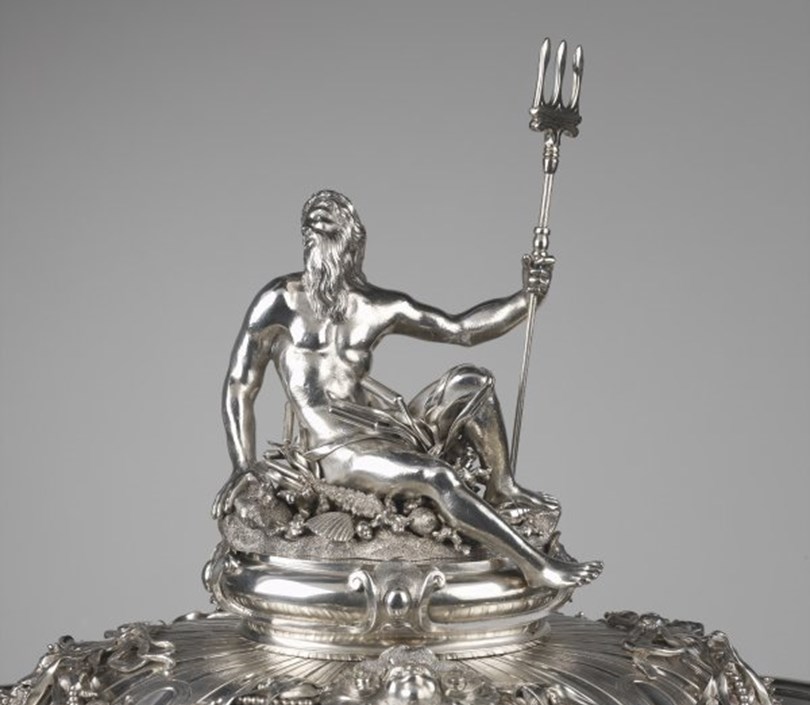 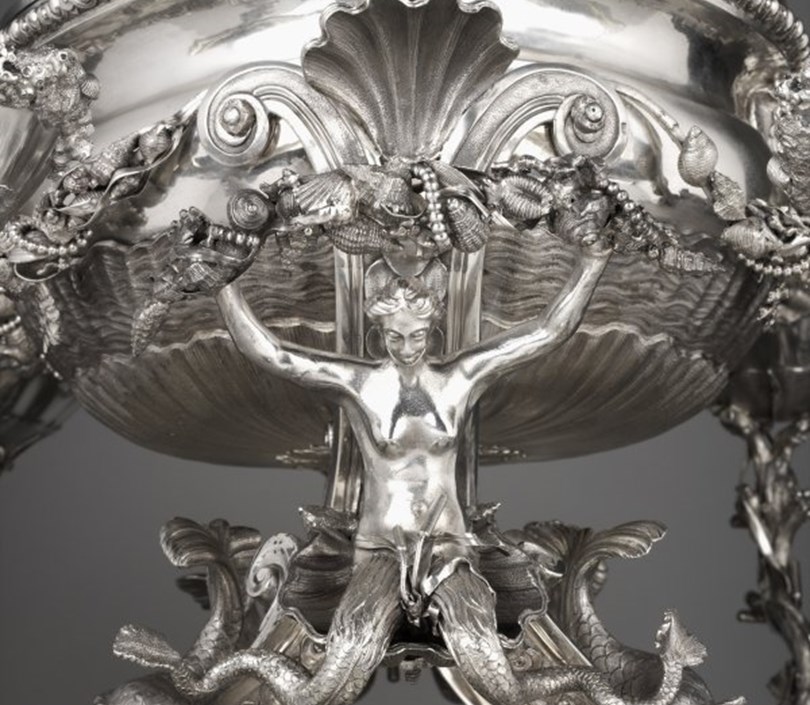 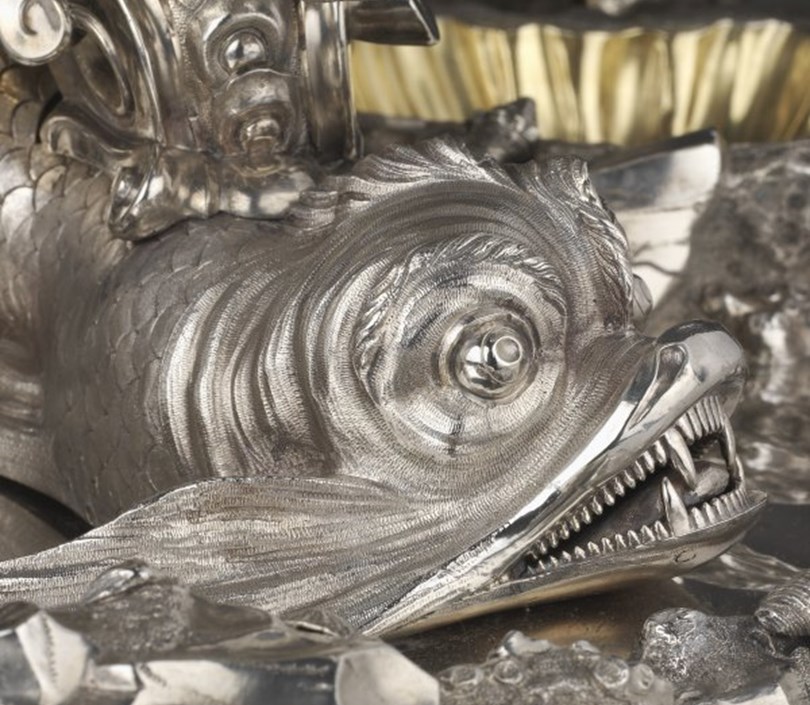 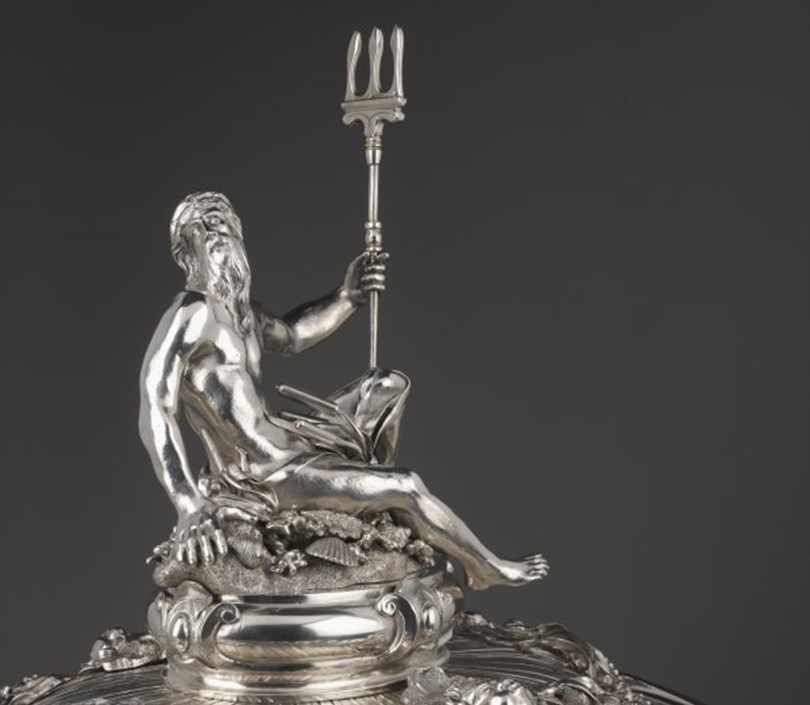 Marked on underside of base and interior of tureen, part marked on cover, finial, branches and supports

The centrepiece comprises a large, oval central tureen the underside of which is applied with a shell, with a pendant drop to the underside formed of small shells, the sides of the tureen are applied with swags of shells and pearls contained in nets suspended from masks, with a guilloche border.  The domed cover has alternating matted and burnished flutes and is applied with further swags of shells, its finial is a reclining figure of Neptune resting on shells.  The tureen is supported on four scrolls legs entwined with dolphins, from each of whose heads springs a naturalistically modelled branch entwined with seaweed and shells and terminating in a shell-shaped bowl supported by the arms of a triton.  All resting on plateau cast and chased with shells, rocks and sea spray and modelled with two further shell-shaped bowls, on shell feet.  The centre of the plateau is applied with a coat of arms and motto within a beaded border.

The circumstances of the commissioning of this extraordinary piece of rococo silver are unknown.  What is known however, is that it is a copy of what must have been an identical centrepiece supplied in 1780 by James Young to Charles Manners, 4th Duke of Rutland (Charles Jackson, An Illustrated History of English Plate, 1911) the friend and political ally of John FitzGibbon, 1st Earl of Clare for whom it was made. The whereabouts of the Rutland centrepiece are currently unknown but it was subsequently remodelled by Rundell and Bridge who enlarged and altered the plateau and altered the legs of the tureen.  The prototype of the Rutland centrepiece was in turn the great Marine centrepiece in the Royal Collection.

The centrepiece in the Royal Collection has been discussed at length in an article by Kathryn Jones and Christopher Garibaldi (‘Crespin or Sprimont? A Question Revisited”, Silver Studies, the Journal of the Silver Society, No. 21, 2006, pp. 24-38).  It is largely unmarked apart from the plateau which is by Paul Crespin and the accompanying sauceboats of 1743 and four salts which are by Nicholas Sprimont.  Like the Rutland centrepiece the plateau of the one in the Royal Collection was altered by Rundell, Bridge and Rundell in 1826.  This present centrepiece is then, the only one to give us a clear picture of what both the royal and the Rutland examples must have looked like prior to all the nineteenth-century additions.

Little is known of James Young and his name does not appear on lists of great English silversmiths.  Arthur Grimwade (London Goldsmiths 1697-1837: Their Marks & Lives, 1976, p. 712) records that he was a plateworker and that his work is of “elegant neo-Classical design and fine finish”.  Although this piece is a copy of the piece in the Royal Collection it displays extraordinary technical skills, most particularly in the modelling and construction of the shell swags applied to the sides of the tureen; the shells are individually cast and held together in finely woven nets.  Young must have had great abilities to have been capable of executing such a technically challenging project.

John FitzGibbon (1748-1802), who in 1784 had been appointed Attorney General of Ireland, would have moved in the same social circle in Dublin as Charles Manners, 4th Duke of Rutland (1754-1787) after Pitt appointed the latter as Viceroy of Ireland in February of the same year.  Sir Jonah Barrington wrote of the magnificent manner in which the Duke and his wife Frances entertained, they were reckoned the “handsomest couple if Ireland and they are known to have patronised the most fashionable craftsmen of Dublin such as the cabinetmaker William Moore.  FitzGibbon would undoubtedly have seen the centrepiece when the Duke and his wife entertained.  It is tempting to speculate on the circumstances under which this centrepiece was made but no evidence has yet been found to throw light on whether it was a gift.  It is clear that the Viceroy’s popularity was bought at a high price in terms of patronage; Pitt’s intentions for Ireland were unpopular and the Duke struggled to retain the support of the Irish establishment.  Ann Kavanaugh (Dictionary of National Biography) describes the relationship between the duke and FitzGibbon as one in which Rutland had “an almost filial regard” for FitzGibbon who in turn had a great admiration for the British ruling élite.

FitzGibbon, who ended his career as Lord Chancellor or Ireland, was the youngest son of John FitzGibbon and his wife Elinor Grove. His father, a successful barrister, lawyer and M.P., came from a comparatively humble family of catholic doctors and gentleman farmers.  His son was educated at Trinity College, Dublin and he obtained his degree in 1766 and entered Christ Church, Oxford.  Like all other Irish barristers of the period he received a legal training in both England and Ireland; in 1767 he entered the Middle Temple and in 1772 was admitted as a barrister-at-law by the King’s Inns in Dublin.

In 1778 FitzGibbon was elected member for Trinity College, Dublin in the Irish parliament.  He lost his seat in 1783 but was re-elected to the pocket borough of Kilmallock which he retained for the rest of his career in the Commons.  Following his appointment as Attorney General his loyalty to the English crown during the crisis caused by George III’s insanity was rewarded with his appointment as Lord Chancellor in 1789.  He was made a British peer, Baron FitzGibbon of Sidbuy in 1799.  He attempted to prevent the rebellion of 1798 in Ireland but supported the Act of Union which then followed although he came to resent it strongly.  He ended his career excluded from the union government with his influence in decline, avoided by his erstwhile allies.

As can be seen from contemporary portraits FitzGibbon was a handsome man and he carefully cultivated his public image which was further enhanced by his great wealth; he maintained a town house in Dublin and an estate at Mount Shannon, co. Limerick. He would seem to have been a devoted father and husband to his wife.

Kavanaugh (op. cit.) sums up his career in the following terms: “Clare is difficult to understand because he himself was never sure of his place in eighteenth-century Irish society.  Throughout his life he strove to escape his Catholic origins and embrace a new, protestant identity, yet could never entirely reject his Catholic past.  He hated Irish Catholics, yet he also pitied their past sufferings and current poverty.  He never fully belonged to the Irish protestant lite, and worse, the English, whom he idolized, never fully accepted him either”. 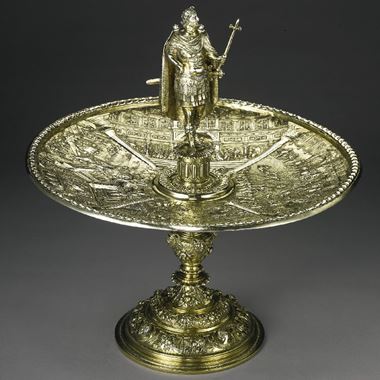 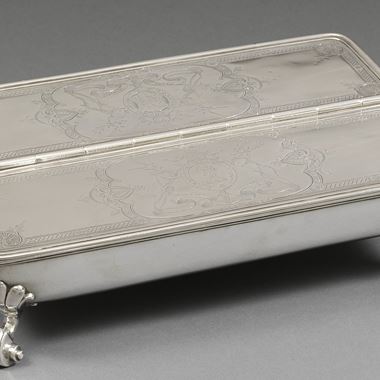 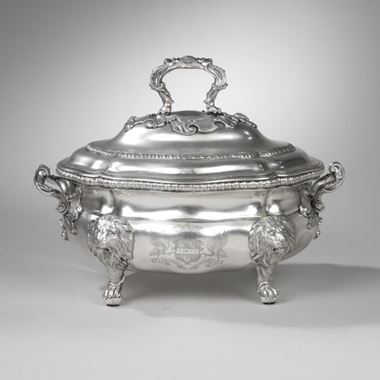 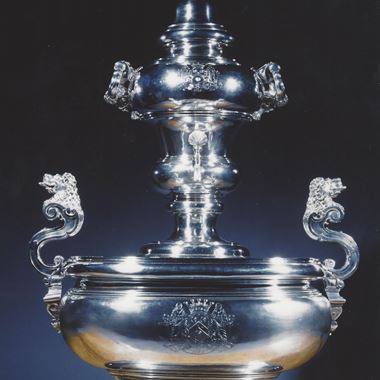