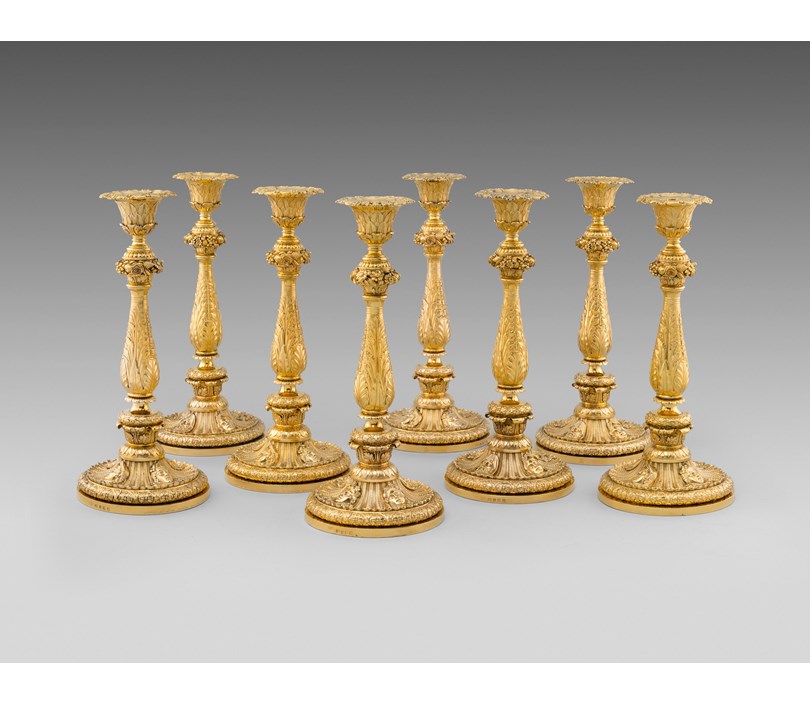 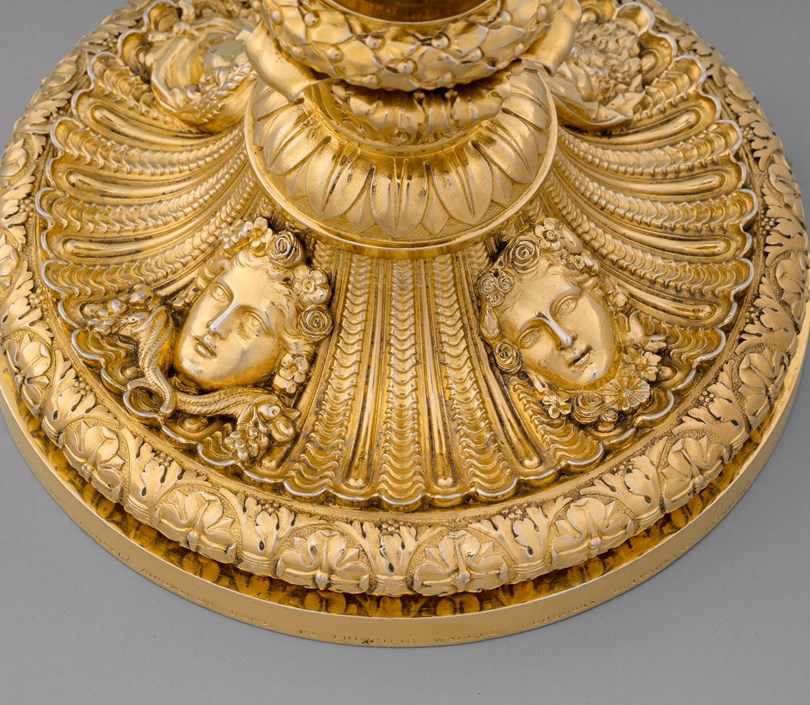 Of cast and gilded silver, the circular bases mounted with heads of the four seasons, the baluster stem decorated with leaves and flowers. Stamped on base "Rundell Bridge Et Rundell Aurifices Regis Et Principis Wallie Regentis Britannias Londini." Engraved on bases and removable sconces with a double crest and with the initials BC below a coronet for Burdett-Coutts.

George Watson-Taylor (1771-1841), probably sold at his auction in 1832, presumably purchased by Harriet Beauclerk (1777-1837), Duchess of St. Albans; thence to her stepdaughter Angela Burdett-Coutts (1814-1906) Sale, The Coutts Heirlooms, Christie's, 17 March 1920, lot 109
These are the only set of eight candlesticks known to exist by Paul Storr.  They are also among the largest and most ambitious candlesticks made in Britain in the 19th century. Another instance of Storr doing his very best work on behalf of Rundell's, they are in superb condition, with crisp decoration and brilliant gilding, and amongst the finest examples of Paul Storr's work anywhere in the world. The double crests are those of Watson-Taylor for George and Anna Watson-Taylor.
George Watson (1771-1841) was a Jamaican planter. He married Anna, the daughter of Sir John Taylor, likewise a Jamaican planter. Anna's uncle was Sir Simon Taylor, yet another Jamaican planter. Certainly the richest man in Jamaica, he was also probably the richest man in the realm. George and Anna were living an unremarkable life in London, when her uncle and brother died in quick succession, and Anna inherited Simon's entire fortune.
They had an income said to be between sixty and ninety thousand pounds a year and were among the richest people in England. They built fabulous collections in art, objects of vertu, books, furniture, and silver. They held lavish parties in their houses with no thought to the future, until the future caught up with them.
Despite Watson-Taylor's opposition as a member of parliament, the anti-slavery movement won major legislative victories, and the new laws decimated the income from his plantations. They were nearly broke by 1822, and so came the first of many sales. They were bankrupt in 1832, when the last of the collection was dispersed. Watson-Taylor died forgotten in Edinburgh in 1841. “No man“ Sir Robert Peel said of him “ever bought ridicule at so high a price."
These candlesticks were sold at one of these auctions, and their second home was nearly as wild a ride as the first. Whether bought at the sale by Rundell, Bridge & Rundell, and sold to her, or whether bought by her directly, they went to the collection of Harriet Beauclerk, the Duchess of St. Albans, whose collection of Paul Storr silver was both vast and exceptionally good.
Hers is a wonderful story of rags to riches. Harriet had been an exceptionally attractive child actress. At fourteen, she had caught the eye of Thomas Coutts, banker to the Royal family. When Coutts's wife died, he married Harriet, and they remained happily married until his death in 1822. Years later, she, having reached the age of 49, married the Duke of St. Albans, who was 26, and, for a Duke anyway, poor as a church mouse. She died, and the marriage having been childless, the whole of her estate, including these candlesticks, went to her step-granddaughter Angela Burdett-Coutts, whose initials and coronet are also engraved on the bases of the sticks. The last time these candlesticks were on the market was at the Coutts Heirlooms sale at Christie's in 1920. 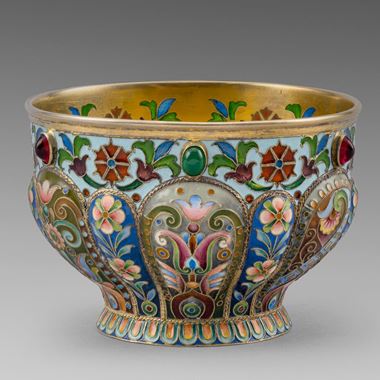